“As we know, PLKN has been rebranded by the Youth and Sports Ministry under a programme to champion the youths.

“It looks like MPs from both the government and Opposition sides are of the same view that the National Service should be revived.

“I will take the matter up with the government to see if it necessary to have the national service re-introduced in line with present needs,” he said during his winding-up speech on the Defence White Paper at Parliament House here yesterday.

Mohamad said the move to bring back PLKN will depend on the financial viability of the government.

Earlier during the debate, Datuk Seri Wan Junaidi Tuanku Jaafar (GPS-Santubong) said that it was crucial to have national service to help prepare the youths for the future, citing Singaporean citizens as an example, where their youths have to undergo two years of compulsory training.

The PLKN programme, which started in 2004, was temporarily stopped by the government in 2015 to reduce its expenditure.

Under PLKN, 18-year-olds were selectively drafted to undergo three months’ training at over 100 camps nationwide.

The programme was reintroduced as PLKN 2.0 in 2016 and was to be made optional for trainees in 2019.

However, last August, Youth and Sports Minister Syed Saddiq Syed Abdul Rahman announced that the PLKN was abolished by the government.

On the Defence White Paper (DWP), Mohamad clarified that the paper’s aim was not to expose abuses under the former Barisan Nasional administration.

“I had received WhatsApp messages during the debates asking me why the DWP did not expose past abuses.

“The DWP is for us to discuss what we will be facing in the next 10 years,” he said, adding that the DWP would make it easier for lawmakers to raise alleged corruption issues involving the armed forces for debates in Parliament in the future.

He noted that the DWP could be used by the government, whether it was from Pakatan Harapan or Barisan.

“Whoever rules, can still use the DWP as it is a defence policy for the country,” he added.

When met at the Parliament lobby, Mohamad said his ministry would request for funds annually as allocations for plans implemented under the DWP.

“We may request more. We are drafting our allocations for the 12th and 13th Malaysia Plan,” he said when asked on how much is being allocated for the White Paper. The Defence Ministry was allocated RM15.6bil or 6.5% of allocations in Budget 2020.

Hisham in no mood to debate 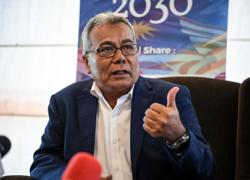