Azmin: Meeting nothing out of the ordinary

KUALA LUMPUR: Amid the many raised eyebrows over his get-together with Umno MPs, PKR deputy president Datuk Seri Azmin Ali described the meeting as nothing out of the ordinary.

“It is not something extraordinary which we should hype about.

“I meet with many people everyday,” he said yesterday.

Referring to the Monday night meeting with a number of Umno and PKR MPs at his residence, he said it was a “normal meeting”.

“I take an open approach. I will meet with whoever that wants to meet me,” he said.

Asked about the nature of the gathering, he said these meetings were merely to get feedback from the ground on how the government was performing.

“I meet with the rakyat, business community and MPs, whether from Pakatan Harapan or others.

“This is important as a government that cares for the people. We want to get feedback from the people and business community on how they are towards government policies,” he added.

Asked about the tongue wagging that followed the meeting and PKR president Datuk Seri Anwar Ibrahim asking him to explain about the Monday night meeting, Azmin merely said: “Don’t listen to rumours.”

To a question on whether he would attend the PKR political bureau meeting tonight and explain to the party leadership, Azmin said he would do so if he was free.

“If there is a need to explain, I will do so. I will check my schedule. Usually, if I have no official duties, I will attend party meetings,” he added.

Asked how many times he had missed meetings by the political bureau, Azmin said he could not recollect the number of occasions.

“But I have all the records to show I had attended party programmes when I was in the country and had no official duties,” he added.

Azmin and several party leaders aligned to him have been notably absent in these meetings, given their strained ties with the Anwar faction in the party.

Asked about this meeting, he merely said he held meetings every day.

Anwar said Azmin has been told to give an explanation about the meeting with 22 Umno and PKR lawmakers that took place at his residence.

“Surely we will ask for his explanation. It has created a lot of questions from our partners, so he has been told to come forward to give his side,” said Anwar.

Speaking to reporters yesterday at the Parliament lobby, Anwar also said he was unsure in what capacity Azmin had met with the opposition lawmakers.

“That is why we want his explanation, whether he is representing the government or the party.

“If it is based on his capacity in the government, why aren’t the other lawmakers invited?” he asked.

Pressed if the meeting was appropriate in view of Pakatan’s loss in Tanjung Piai, Anwar said: “Sometimes our friends do not learn from our experience from the huge defeat in Tanjung Piai.”

In George Town, PKR vice-president Datuk Dr Xavier Jayakumar said Pakatan members should get consent from the presidential council before having meetings with members of other political parties.

“I hope this process would be adhered to as some of us were not in the know about the meeting,” he said.

Separately, Prime Minister Tun Dr Mahathir Mohamad said he was aware of a meeting between a group of MPs from Barisan and PKR with Azmin, but did not know the details.

“I heard about it but I don’t know what they talked about,” said the Pakatan chairman.

Hisham: I am ready for board probe 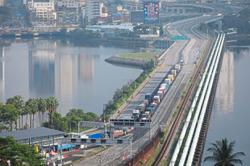