Sec-gen is asking for a mutiny, say PKR Youth leaders

PETALING JAYA: PKR secretary-general Datuk Seri Saifuddin Nasution Ismail has been accused by a majority of the party’s youth central leadership members of triggering a “leadership crisis” after he rescinded an invite to Datuk Seri Azmin Ali to open the wing’s national congress, which is usually launched by the deputy president by convention.

In a statement signed by 21 of the 25 PKR Youth central leaders elected in the last party elections, the group condemned Saifuddin for triggering a “leadership crisis”.

Saifuddin withdrew the invitation to Azmin to launch the

“The PKR Youth National Congress is the place to improve the cohesiveness and unity of party members.

“The statement by Saifuddin on Nov 12 cancelling the invitation to Azmin to officiate the PKR Youth national congress is a reflection of the current party leadership crisis.

“The action to cancel the invitation goes against the spirit and tradition of the congress and the organisation.

“Saifuddin is sending out the wrong message to the members, unless the secretary-general wants divisiveness and rebellion to continue to fester in the party, ” said the statement that was signed by youth leaders nationwide.

The youth and women’s wings will usually hold their congress prior to the opening of the national congress.

It has been an accepted norm since the formation of PKR that the deputy president will open the youth and women’s national congress before the main congress takes place.

Wanita PKR had also invited Azmin for its congress, and for now, he will come to open the women’s gathering early next month.

“To be fair, Kak Wan (Dr Wan Azizah) is the DPM. The tradition of inviting the deputy to officiate the congress... I think even Umno does that, ” he said at the Parliament lobby yesterday.

PKR has been beset with upheaval since the last party elections when members were divided between the teams of Azmin and his opponent Rafizi Ramli for the post of deputy president.

Rafizi was openly supported by party president Datuk Seri Anwar Ibrahim and Saifuddin, resulting in a public spat between Azmin and Anwar for many months.

The situation, however, cooled down recently with a perceived conciliation in Parliament between the top two party leaders last month.

In Sarawak, a petition is also making its rounds among state PKR divisions in an attempt to oust Baru Bian as the state PKR chief.

Baru, who is also Works Minister, Ba’ Kelalan state assemblyman and Selangau MP, was said to be holding too many portfolios, the petition stated.

It further claimed that Baru was too busy to concentrate on his duties to the party.

Baru’s aide, Vernon Kedit, dismissed the petition as “mere rumour not worth commenting on”. 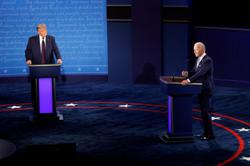