PKR president Datuk Seri Anwar Ibrahim said such baseless allegations should not be entertained unless Umno could provide facts and evidence to support their claims.

“It is baseless. They can claim but the legal process is independent and transparent.

“I don’t think we should entertain the allegations unless they can give some facts or evidence to support them.

“Otherwise, we should allow due process to proceed.

“The judge has given enough leeway to the defence, let the process be respected, ” Anwar said when met by reporters at the Parliament lobby on Tuesday (Nov 12).

When met, Umno MP Datuk Seri Hishammuddin Hussein said that the question of whether the judiciary was influenced could only be answered by those directly involved with the case.

“The people who can answer that are the judiciary, the prosecution and the agencies. But accusations works both ways.

“We too have been accused of such allegations when we were once the ruling government, ” he said when asked to comment on the matter.

However, he said that the question of the judiciary being influenced in Najib’s trial was immaterial.

“What is more important is not the question of who is influencing whom.

“Rather, it is the process of the court case that will determine the future integrity, independence and credibility of the judiciary, ” he claimed.

Hishammuddin, who is a former Umno vice-president and Cabinet minister, described Najib’s decision to give sworn evidence from the dock as “an apt and brave” move by the former prime minister.

“This is will allow all of us the find the truth, ” he added.

“You must let the legal process and proceedings continue.

“This is merely the second phase where Najib has been called to enter his defence and this is the procedure, ” he added.

On Monday (Nov 11), Umno supreme council member Datuk Lokman Noor Adam said that if not for Dr Mahathir’s meddling, Najib would have been a free man.

This comes after the High Court ordered Najib to enter his defence of seven charges in the SRC International trial involving the misappropriation of RM42mil in SRC funds.

Dr Mahathir rubbished Lokman’s claims, saying that he never interfered with the court’s decision even when the court declared Umno as illegal when he was its president then.

Now I have chance to clear my name, says former PM

Tun M as shocked as Najib

It’s going to be a very long case, says Shafee 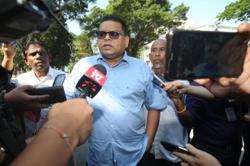