Victory speech: Ter, flanked by other ACCCIM officials, speaking at the WCEC handover ceremony in London.

Malaysia’s apex Chinese chamber ACCCIM was given the recognition for its organisational ability in London recently when it bagged the coveted job to host the World Chinese Entrepreneurs Convention in 2021.

THE Associated Chinese Chamber of Commerce and Industry Malaysia (ACCCIM), which put up a spectacular show on the handover/closing ceremony of the World Chinese Entrepreneurs Convention (WCEC) in London on Oct 23, had helped inject the much-needed life and pomp into the last night of this congress.

The three-day 15th WCEC, hosted by UK Chinese Business Association (CBA) in London on Oct 21-23, had been marred by programme delays, over-emphasis on UK-China relations and lack of enthusiasm by participants, due to CBA’s lack of experience in organising major international events.

Hence, when ACCCIM president Tan Sri Ter Leong Yap – the chairman for the next WCEC – went on stage and promised a “world-class extravaganza” for WCEC in June 2021 in Malaysia, he won a warm applause.

Ter’s speech, followed by the screening of a congratulatory message to ACCCIM from Prime Minister Tun Dr Mahathir Mohamad and the sterling performance by Malaysian singers Datuk Sheila Majid and Lee Pei Ling captured the full attention of 3,000 Chinese businessmen from 80 countries.

For the first time in three nights, noisy diners flirting from one table to another sat still with their eyes glued to the dazzling stage. For once, the master of ceremony did not have to plead for silence from the floor.

Ter, accompanied by ACCCIM council members and other Malaysians waving the national flag, took over the rostrum after it was announced that ACCCIM had beaten other countries to win the bid to host the most prestigious global Chinese event in 2021.

The late autumn night of Oct 23 outside ExCel Exhibition Centre in the suburb of London was freezing cold with drizzles, but Malaysians felt warm and elated inside.

It was one of the most moving moments for Malaysians when Ter received the WCEC flag from Dr Jonathan Choi, chairman of the Hong Kong Chinese General Chamber of Commerce, after the latter declared: “After many serious considerations, we have decided to select ACCCIM from Malaysia to host the 16th WCEC in 2021.” 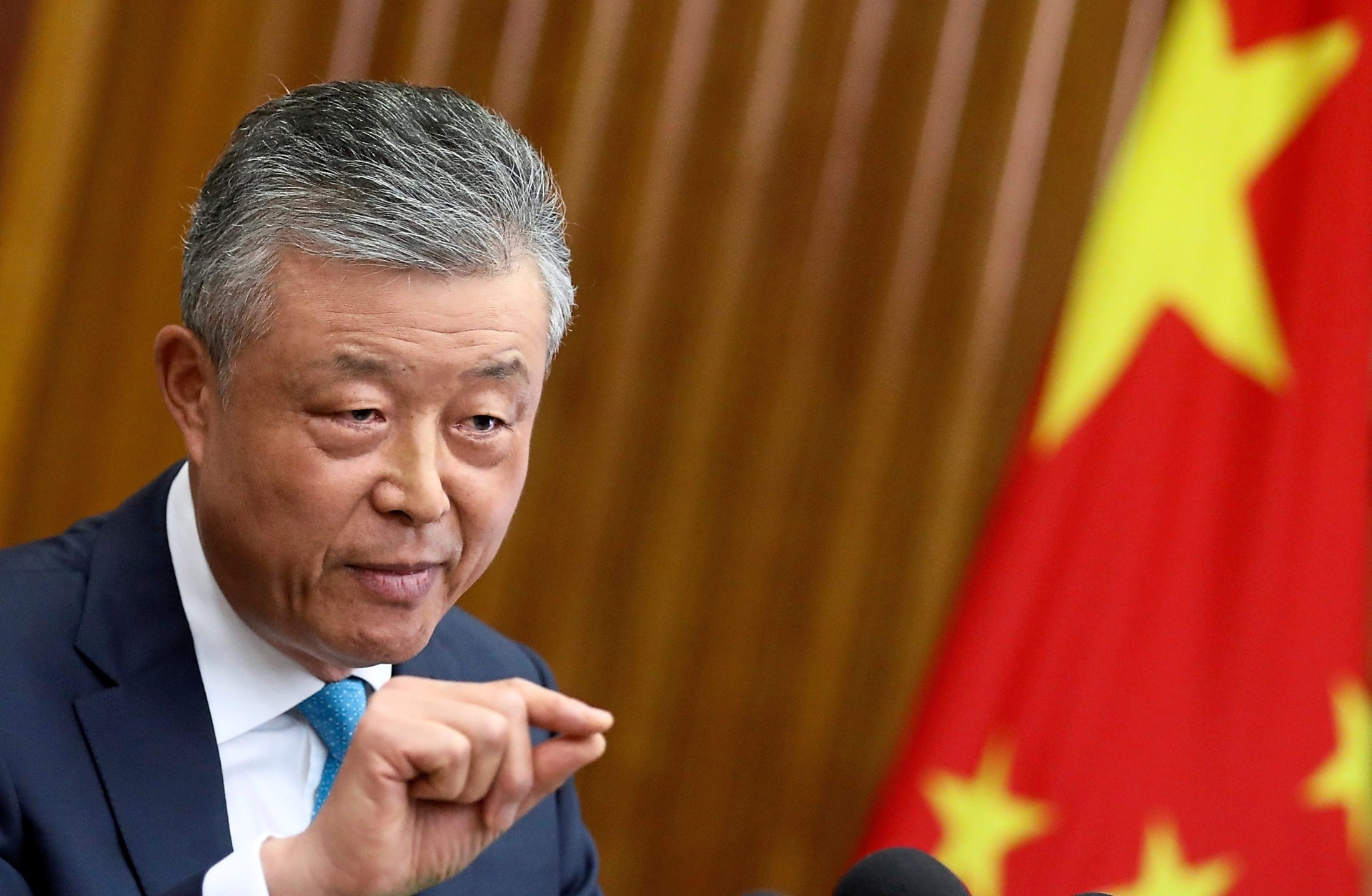 At the handover ceremony, the exuberant Ter spoke with a sonorous voice: “Hosting WCEC is a huge responsibility but the most honourable task. This is a historic moment for ACCCIM. As Malaysians, we feel most honoured to be the host for the next WCEC; and as ACCCIM president, this is the most memorable moment for me.

“WCEC is a very important global platform and we are fully committed to do our very best in order to present you with a world-class WCEC in 2021.”

In fact, winning the WCEC job was “a must” for the 55-year-old community leader, who had traversed the globe in his de facto election campaign to seek international support for ACCCIM’s bid.

It has been the “secret” dream of Ter to serve not only the local and international Chinese community, but also the nation, according to ACCCIM officials. And hosting WCEC will cover the interests for all.

The WCEC gathering is expected to provide ACCCIM an opportunity to promote Malaysia as the gateway for global businessmen to gain access to different global markets, countries along the Belt and Road, the Muslim and ASEAN countries.

As ethnic Chinese outside China have amassed US$2 trillion (RM8.4 trillion) in assets all over the world, tapping these vast resources through WCEC channels is one of the best ways to help fellow Chinese, and even non-Chinese Malaysians, to prosper.

“Tan Sri Ter also hopes to bring into Malaysia 3,500-4,000 Chinese businessmen to join in the big 100th anniversary celebrations of the founding of ACCCIM, before he retires as ACCCIM president, ” one of his colleagues in ACCCIM disclosed.

The WCEC, set up in 1991 and supported by governments, is the world’s largest and best-represented congregation of Chinese investors and entrepreneurs around the globe.

It provides an important platform for Chinese all over the world to share their experiences, explore new business opportunities, build up networks and foster economic cooperation.

Since its inception in 1991, WCEC has also been given strong support by Beijing mainly because “overseas Chinese” (Chinese outside China) and their descendants have made great contribution to the economic development and growth in China, according to China’s Ambassador to United Kingdom Liu Xiaoming.

With the emergence of China as an economic giant, as well as Beijing’s pro-globalisation policy, WCEC is increasingly used as a platform for mainland businesses to learn from overseas Chinese and to seek investment opportunities outside China.

It is also a platform used by the host country to lure capital-rich Chinese investors. The 15th WCEC in London saw the signing of potential joint ventures between businessmen from China and the United Kingdom.

Liu, who spoke three times at the 15th WCEC, sees WCEC as having transformed into “a platform of global influence that could play an important role in the quality development in China’s Belt and Road Initiative”.

“For future WCECs, I hope you will be the bridge linking China and the world, helping to create new space and opportunities for all, ” he said at the 15th WCEC closing ceremony.

Although ACCCIM will be next WCEC host, the audience on the floor was not told why ACCCIM was the victor.

However, one of the judges told Sunday Star that ACCCIM’s size and organisational ability was a key winning factor.

He said: “ACCCIM’s ability in organising major international events is strong and proven. We need a strong chamber to organise such event and ACCCIM is the largest Chinese business chamber outside China.

“Country-wise, Malaysia has a lot to offer. Its friendly people, nice food, diversified cultures and potential investment opportunities, and the fact that it is a belt-and-road country, make it a good venue to host the next WCEC.”

ACCCIM has presented Malaysia’s political and economic stability, good infrastructure and hotel availability, business-friendly policies and strong organisation of ACCCIM as factors for the judges to consider.

It is a known fact that ACCCIM, with Chinese corporate members of more than 100,000 in the country, is a respected national NGO that has worked closely with the Government on matters linked to the national economy and business interest of the Chinese community.

Indeed, ACCCIM – backed by a strong and efficient secretariat – has had the expertise and experience in organising many international conferences and functions held in and outside Malaysia.

And hosting WCEC is not new to ACCCIM.

In July 2003, ACCCIM – headed by Tan Sri Lim Guan Teik then – was the organiser of the 7th WCEC in Kuala Lumpur.

The 7th WCEC, attended by 3,300 delegates from 21 countries and regions, was officially opened by Tun Mahathir, the premier then.

Founded jointly by the Chinese chambers of Singapore, Hong Kong and Thailand, this biennial WCEC event has become the most esteemed among all Chinese gatherings.

The trilingual Ter, in his short Mandarin-cum- English speech, also gave delegates a glimpse of what could be expected in Kuala Lumpur.

Promising to turn the WCEC event in 2021 into an unforgettable function, Ter said ACCCIM aims to use the event to promote Malaysia and ASEAN as the focus for regional economic development and investment centre. He announced the venue for 16th WCEC will be at KLCC Convention Centre.

Some of the themes for the conference will be on leadership, globalisation, digitisation, innovations and corporate strategies.

There will be a special session for Chinese youth and women entrepreneurs to ensure that there will be continuity for WCEC.

Despite enjoying the jubilation, Ter did not forget to sell multiracial Malaysia as a good investment destination that comes with sprawling sandy beaches, rich cultures, durian and other mouth-watering foods.

The charismatic leader decidedly transformed himself into a tourism “ambassador” at the end of his speech: “Our warm and friendly Malaysians, including the oldest and most charming Prime Minister in the world, will definitely welcome you with open arms to Kuala Lumpur on June 21,2021.”