Penang to benefit with pier concession

Steaming ahead: An aerial view of the NBCT where the FCZ is to be located and Sasedharan.

GEORGE TOWN: From hotels, malls and food outlets to trishaw peddlers, all are expected to benefit once the Federal Government gives the nod to Penang Port Sdn Bhd (PPSB) next month to operate the Swettenham Port Cruise Terminal (SPCT) under a 30-year concession.

And if they also get a Free Commercial Zone (FCZ) status, it will be the icing on the cake and a boost to Penang’s economy.

PPSB chief executive officer Sasedharan Vasudevan said the barometer of the state’s economic growth lies with these two developments, which would have a direct impact on the tourism dollar.

“The SPCT expansion and the FCZ will attract more international shipping lines to Penang.

“It will turn the port into one of leading ports in the country, and provide a major boost to our growth over the next three years, ” he said in an exclusive interview.

“Once approved by Cabinet, we can look into commencing work on the RM155mil expansion which is our target for the last quarter of this year. We expect approval for both the concession and FCZ this month, ” he said, adding that PPSB has been operating Swettenham Pier via a management contract.

The PPSB has entered into a joint venture with the Royal Caribbean Cruises Ltd (RCCL) to redevelop the SPCT which includes extending the existing berth to 660m from the current 400m. This would enable two mega cruise vessels to berth at the same time.

“The FCZ has the capacity to generate spill-over business opportunities from warehouse to retail, as well as transportation and logistics.

“It’s basically seamless shipping experience. We are actually the last port without a FCZ but with the new status, it gives us an opportunity to go into new market, boosting our TEUs (Twenty Equivalent Unit).

“Above all, the FCZ would help to lower the shipment costing, reduce the documentation hassle, provide effective storage and brings value-added dimensions to the entire process.

“Five years ago, we were just a feeder port but today, we do direct shipment up to far east, including China, Korea and Japan with big ships which bring in 5,500 TEUs, ” he said.

Meanwhile, Sasedharan said the PPSB is eyeing an estimated 70ha of land from the 200ha to be reclaimed by Rayston Consortium (Butterworth) Sdn Bhd (RCSB) for port-related activities.

“We are still negotiating with the Penang Port Commission (PPC), and an application will be made for the entire stretch to be a FCZ once it’s reclaimed.

“With the reclaimed land, it will push the present 1.6 million to 3 million TEUs with the existing footprints.

It is believed the entire reclamation work could cost around RM1.3bil to RM1.5bil.

Sasedharan said they also hoped to get a new tariff rate, which they had submitted in 2015.

“We expect the new tariff rate to be tabled and gazetted in the next Parliament sitting. We asked for a 40% increase, ” he said.

Sasedharan said PPSB has proposed a revolutionary method in tariff rates by working on a five-year table and getting it approved.

“This is much more practical compared to the traditional method which doesn’t take inflation into account, and the cost may go up by the time the approval is obtained.

“The target is beyond 2030 where we plan to hit seven million TEUs in a decade from now. We are working closelyg with PPC by putting in place a 10 year Master Plan.

Sasedharan said close to RM500mil for capital expenditure have been spent anticipating new businesses, including the Kulim International Airport, the development in Northern Perak and also the Kota Perdana Free Trade Zone in Kedah.

“Our master plan will outline our activities for the future, including transforming the way we do business traditionally and pushing towards automation, ” he said. 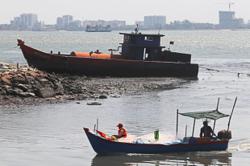