Historic ceremony: Sultan Abdullah and Tunku Azizah were among the 185 heads of state and foreign dignitaries who witnessed the enthronement of Emperor Naruhito at the Imperial Palace. — Bernama

Sultan Abdullah, who donned the Army No. 1 ceremonial dress, and Tunku Azizah, who was in a pink baju kurung, were accompanied by Malaysian Ambassador to Japan Datuk Kennedy Jawan to the historic ceremony that marks the accession of a new emperor of the Land of the Rising Sun.

The presence of the Malaysian King and Queen was at the invitation of the Japanese government.

Naruhito, 59, succeeded the throne from his father, Emperor Akihito, on May 1, after the latter abdicated due to health reasons, becoming the first emperor to do so.

His ascension to the throne will begin a new era in Japan known as “Reiwa” which means “harmony and order”, effectively drawing the curtain on Akihito’s era since 1989 known as “Heisei” (achieving peace).

The most-awaited ceremony, which began at 1pm local time (12pm Malaysian time), took place in the most prestigious and elegant hall known as Seiden Matsu-no-Ma (State Room) at the Imperial Palace.

To begin the ceremony, Naruhito, who was dressed in a dark orange “gosokutai” robe, which is worn only by emperors, and the “ryuei-no-onkanmuri” crown, took his place on the Emperor’s Throne, while Empress Masako, dressed in an elaborate five-layer silk court kimono, took her place on the August Seat of the Empress.

With only drums and gongs sounding, the deep purple silk curtains of the throne were then drawn back to reveal the royal couple standing within.

Naruhito then proclaimed his enthronement, followed by Prime Minister Shinzo Abe delivering a congratulatory speech before exclaiming “Banzai!” (Long Live the Emperor) three times with the firing of a 21-gun salute.

The ceremony ended when the curtains of the throne were closed and the royal couple left the Seiden Matsu-no-Ma. — Bernama 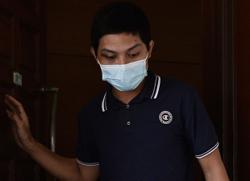