Strengthening synergies between govt and industry

It was a full house for the Miti joint ministerial dialogue session, which saw the attendance of numerous industry players and government officials.

KUALA LUMPUR: Following the conclusion of the month-long Miti Consultative Dialogue 2019 to engage directly with industry representatives and related stakeholders, the Ministry of International Trade and Industry (Miti) has reaffirmed its commitment towards championing the industry.

Throughout the engagement period, the dialogue addressed a score of issues raised by industry players, which relate to incentives, aerospace, automotive, textile, the fourth industrial revolution (IR4.0), trade facilitation and Asean.

Key concerns raised during the day include the time frame of approvals by government agencies, issues relating to foreign labour and the costs of doing business.

Leiking shared that the government had addressed the first issue by establishing a quick approval committee to fast-track investments and reiterated his awareness on the other concerns.

In terms of strategic direction, Miti is in the midst of planning to formulate a new industrial masterplan post-2020. Among the focused areas are the sustainable development of industries, which includes green technology initiatives along the horizontal and vertical value chain of the manufacturing sector.

Among the biggest takeaways of the dialogue session with the industries, he pointed out, include the need to avoid unilateral decision-making processes that impact the industry and to escalate industry input to the Cabinet, before the implementation of new regulatory reform.

Recognising the need for ongoing discourse with the industry, after repeated calls for more stakeholder engagement, Leiking committed to holding the dialogue biannually next year. Further, he also gave the assurance that ‘reasonable and sensible’ industry demands will be given due consideration by Miti, which will champion industry issues in the same vein.

Feedback from industry players show general consensus that the dialogue is a welcome platform for the business community to provide its insights to the government and to voice important issues and concerns impacting trade, commerce and the business environment.

The Federation of Malaysian Manufacturers vice president and logistics committee chairman Datuk Dr Andy Seo pointed out that the Miti Consultative Dialogue was a good effort that enabled industry players to not only bring up new concerns, but also follow up with the government for updates on existing issues that have already been raised by FMM and other stakeholders.

Highlighting the industry’s call to simplify various processes for applications in order to make them more straightforward and less costly, Seo said that one of the issues raised in the session was the application process for foreign labour, as it was a challenge that all businesses in the country are constantly grappling with.

He further revealed that industry representatives were also given an update on the Regional Comprehensive Economic Partnership (RCEP).

RCEP, which is currently being discussed by the 10 Asean countries and six of its FTA partners – including China, Japan, South Korea, Australia, New Zealand and India – recently had its latest round of talks in Bangkok on Oct 11.

Discussions continued well into the Miti joint ministerial dialogue session on Oct 16, where Leiking shared the government’s common vision to attract quality investments and spur positive spin-off effects towards the creation of high quality jobs for locals, optimise the usage of national resources, as well as accelerate technology penetration and adoption among industry players, most notably the small and medium industries within the value chain.

Another 29 issues across nine ministries were looked into, including matters such as government consultation, palm oil, renewable energy, licensing procedures for new hospitals, foreign workers, tax issues and water supply.

FMM’s Seo, who was also present for the Oct 16 session, requested for an update on the issue of profiteering in the logistics industry, citing escalating costs from terminal handling and depot gate charges that have jumped from seven to 20 times their previous prices. He was given the assurance by Chong that KPDNHEP will deliver a response to FMM, once it clarifies the legal aspects surrounding the issue at hand.

In response to a separate query by an industry representative on environmental efforts, Yeo said, “Going ahead of the curve is not ideal. It’s about striking a balance between priorities and the one that would bring the best impact to the environment.”

That said, the consistent focus for industry players throughout the day’s session was repeated calls for the government to put in place policies for local procurement to support the industries here, by buying Malaysian products and giving preference to local companies instead of multinational corporations. This led to the ministers revealing that a policy on procurement will be forwarded to all government departments on prioritising the purchase of Malaysian products.

Kok, on the other hand, delved into the issue further by noting that such initiatives must be driven by the people and not the government alone to create lasting impact.

She said this in answer to a suggestion from a Malaysian Rubber Products Manufacturers Association representative for the government to procure at least 30% of its natural rubber locally and stimulate the uses of local natural rubber to support the local SMEs in the sector.

“A campaign that is supported by only one party will not succeed. It must be a people-led campaign as well.

“We always say buy Malaysian made products, support local products, but it’s all talk. I believe that to do this, it starts from the individual, from every one of us buying and supporting Malaysian products, ” she opined.

Chiming in, Mohd Hatta shared that the Malaysia Halal Expo, jointly organised by MED and the Malaysian Islamic Development Department (Jakim), is among the initiatives undertaken by the government to promote local products.

The dialogue, brought back by Miti after a decade-long hiatus, is an industry engagement platform for the government to address industry-related issues raised by the private sector and gain industry insight through suggestions and feedback, in the aim of further improving on the public delivery system.

It is also the first time other ministries were brought in by Miti to participate in a joint ministerial dialogue session as part of the Miti Consultative Dialogue, so that they can also weigh in and address business concerns raised by industry players from Malaysia’s various sectors.

Earlier in the year, Leiking announced two initiatives to strengthen synergy with the industry during the Sept 12 launch of the Miti Consultative Dialogue 2019, which was attended by 400 industry representatives.

The first, Friends of Miti, is an industry, trade and investment database that will comprise the latest information on realised projects or the opening of plants, the latest industry 4.0 tools and machineries, details of trade investment missions and export promotion activities, as well as links to application pages for the grants and incentives under its purview.

The other initiative is the Miti Consultative Group for Industrial Development (CGID), which is meant as a platform for industry players to be more involved in the policymaking process.

“The Miti CGID will be incorporated in the amendment to the Industrial Coordination Act 1975, which we target to table in Parliament by the fourth quarter of next year, ” he said.

The Miti Consultative Dialogue is among the areas highlighted by Leiking in his first networking session with business and industry associations, as well as chambers of commerce, held in mid-August last year. 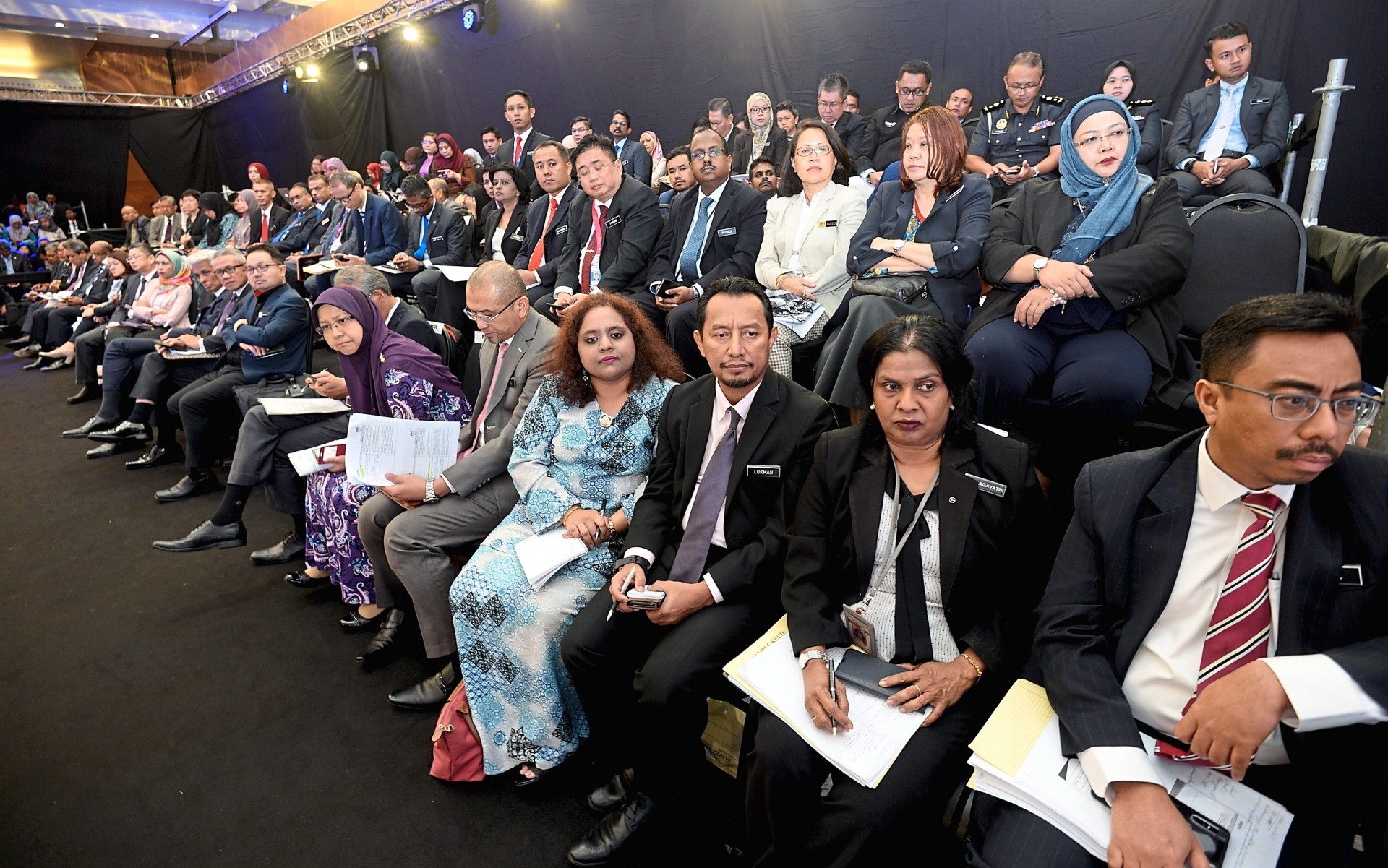 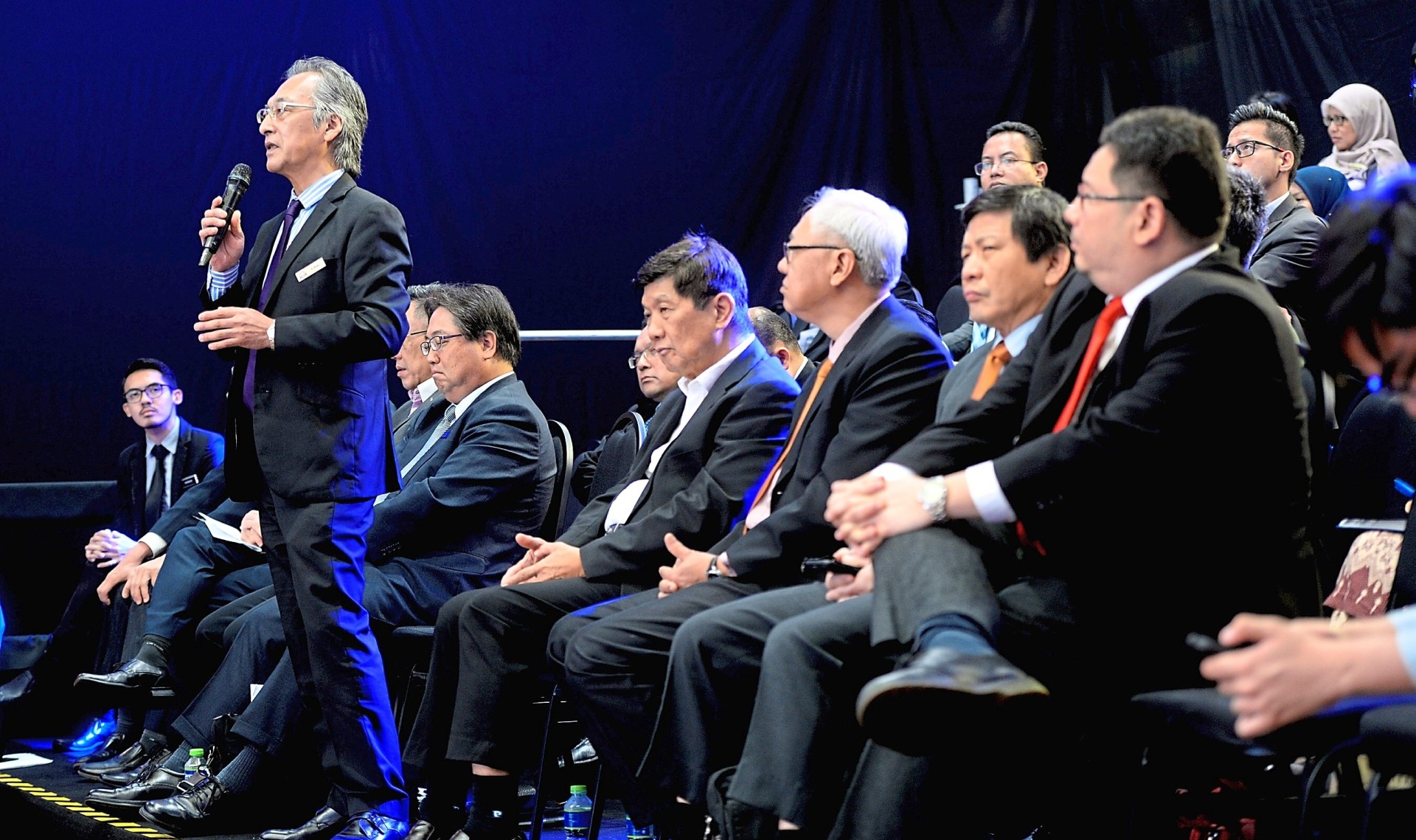 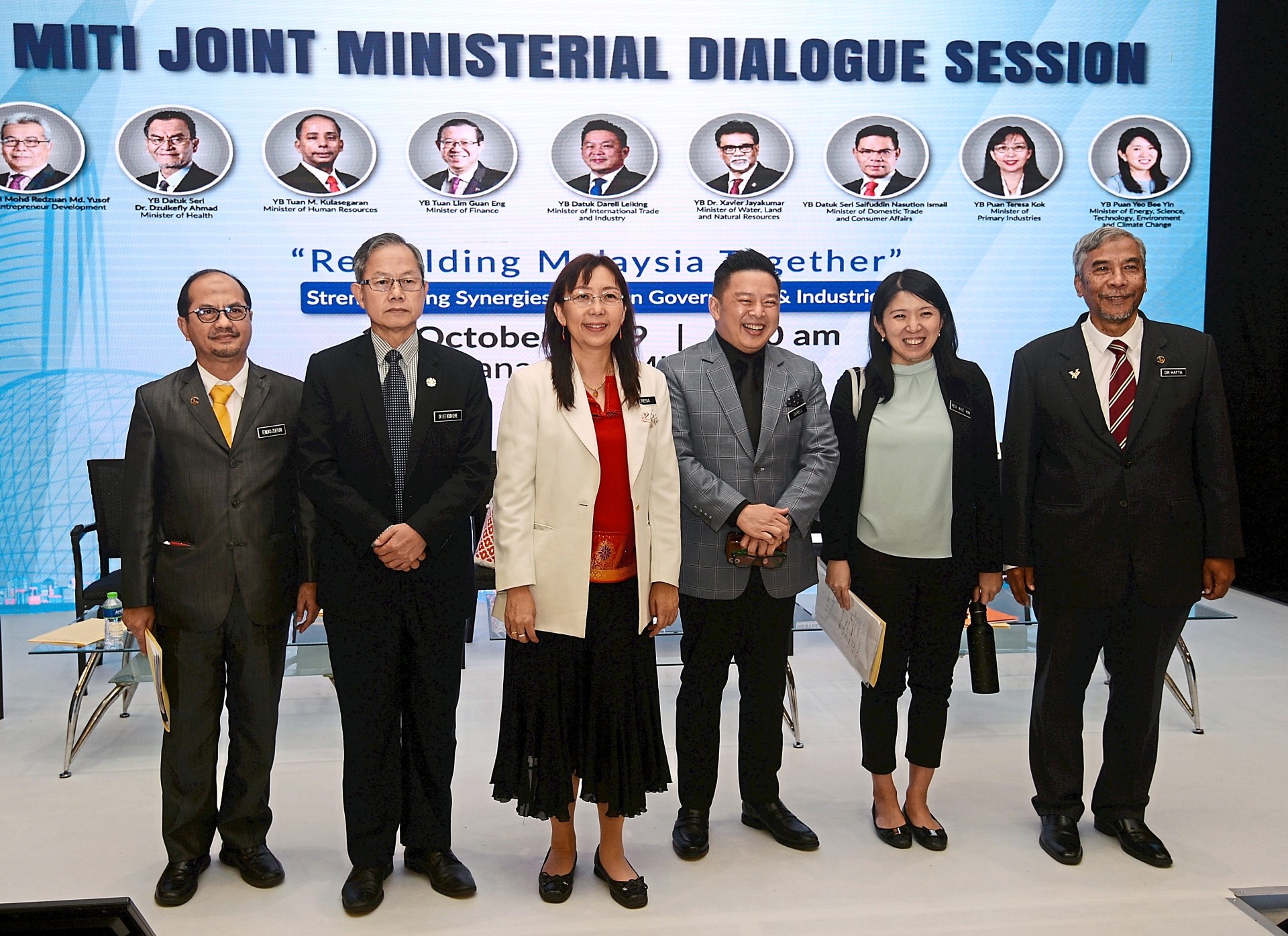 It was a full house for the Miti joint ministerial dialogue session, which saw the attendance of numerous industry players and government officials.

The dialogue will be held biannually in 2020, said Leiking.

An industry player voices his concerns to ministry representatives during the dialogue session with the various ministries.