Standing the test of time

In Valencia, Gamuda Land's philosophy of working with nature has led to a lush environment for both the residents and creatures like this White-throated Kingfisher

As extreme climatic phenomena inundate countries with haze, heatwaves, storms and flash floods, the world once again begins to take a step back and reflect on the causes and actions to be taken.

The anxiety also alarms the younger generation, leading to significant climate movements that have seen the rising of personalities like 16-year-old Greta Thunberg from Sweden who appears to be the face of climate change activism.

It has since spurred many leaders, law-makers, large corporations and ordinary people to relook into their policies, operations, businesses and lifestyle to effectively address the issue.

Yet, in areas of tackling climate change, town-maker and multi-award-winning developer Gamuda Land has in fact long espoused the principle of working with nature and reconnecting its community with the natural environment.

This philosophy encompasses all their developments, both large and small.

The developer’s foresight of masterplanning and building by respecting nature are best exemplified in Valencia, given the fact that the development is now close to 20 years old.

Many of the results seen in the township today are by-products of steps taken in the past, verifying and reassuring that its town-making principles and methods were suitable and effective. 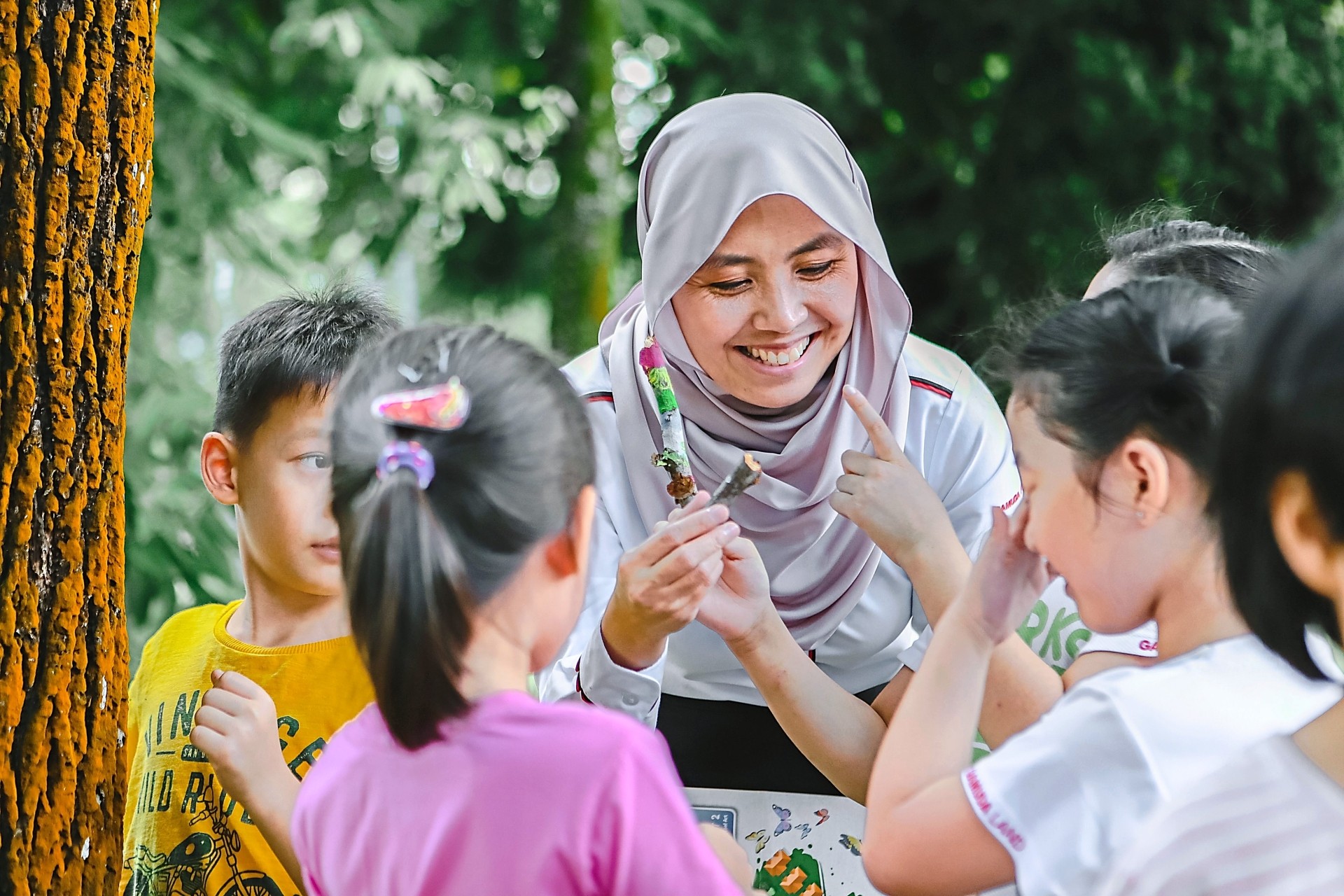 Moving on from here, to consolidate all these learning, Gamuda Land set up Gamuda Parks in 2018 – a self-driven pioneering initiative that carries a mandate to deliver, implement, manage, maintain and safeguard the well-being of the living environment in all its developments.

The number of trees planted thus far is equivalent to sequestrating more than 200,000lbs (about 90,700kg) of carbon, effectively absorbing carbon dioxide emitted from 1,651 cars.

“At Gamuda Land, we are guided by sincerity, committed to act responsibly and motivated by originality where we assiduously practise the principle of being ‘mindful’.

“A critical aspect of our town-making is listening to what the land has to tell us and permitting the terrain and topography of a site to dictate the language of the masterplan design,” states Gamuda Parks chief operating officer Khariza Abd Khalid.

Part of the methodologies include advance tree planting in strategically planned positions and careful selection of flora species according to the benchmark of the neighbouring Forest Research institute of Malaysia (FRIM), turning Valencia into a tropical setting with 30% of the land dedicated to greenery and water bodies.

“Terrain guided practice helps minimise the need for ‘cutting and filling’ the land as well as importing and exporting earth,” explains Khariza.

“With this, we attained better slope stability, efficient rainwater filtration and reduced soil erosion, which also resulted in varying scenic vista for each home.

“Meanwhile, to create privacy and protect homes from errant airborne golf balls, we established indigenous woodland belts around the golf fairways that served as natural screens.

“These green buffers not only inject a cooling and panoramic element into their surroundings but double as nurturing grounds for growing biodiversity,” Khariza added. 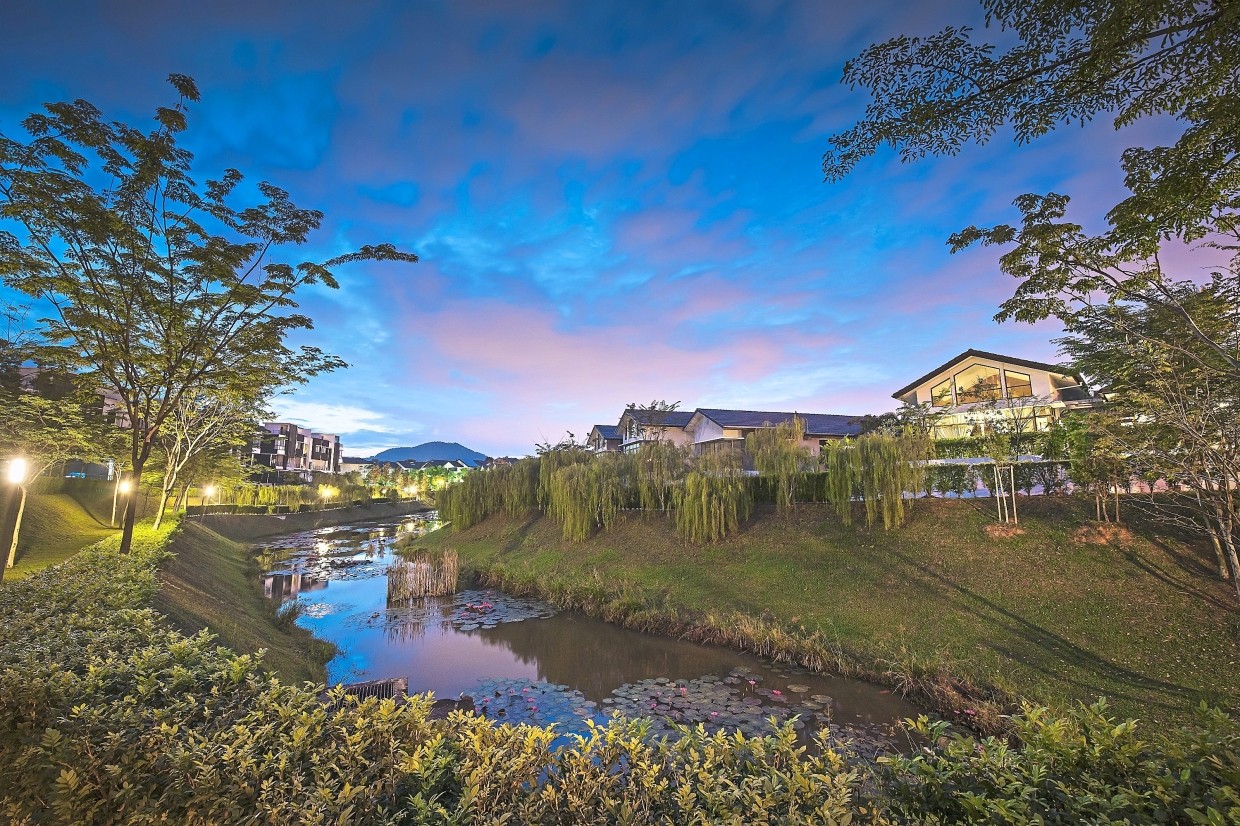 After almost 20 years, Valencia’s undulating green has grown into a signature sight, verifying and reassuring that the town-making principles and methods were suitable and effective.

For the past year, Gamuda Parks has collaborated with a panel of experts to formulate a “Gamuda Parks Biodiversity Policy”, which was recently published in August 2019.

Their valuable input following methodical scientific research has resulted in the policy that governs the conservation of biodiversity and the management of ecosystems through masterplanning, design, development and maintenance of all the Gamuda Land developments.

The policy covers the green (flora maintenance), blue (waterscapes) and brown (material management) elements, aiming to encourage robust biodiversity since the best indicator of a healthy ecosystem is the volume and range of different species found within an area.

At the same time, Gamuda Parks has undertaken comprehensive biodiversity audit and data compilation exercise not only for its developing and new projects like Gamuda Cove and Gamuda Gardens, but also for Valencia, despite the fact of being sold out and completed many years ago.

Timely environmental responsiveness is critical to contain damage to an ecosystem.

The Dalai Lama summed it up best when he said, “The natural environment sustains the life of all beings universally.”

Thus, committed to leaving the lands in better shape before it was first received, it is only fitting that Gamuda Land included Valencia in the audit.

Gamuda Parks has introduced fun and interactive initiatives such as the recent World Habitat Day Celebration at Valencia to help raise awareness among the residents and even enlist new recruits into its green school of ideology as GParks Rangers.

“We are the first property developer in Malaysia to adopt a comprehensive scientific approach to measure the quality of the living environment within our developments.

As a result, we are now better placed to monitor and coordinate measures to safeguard and enhance the presence of biodiversity within Valencia and other developments,” asserts Khariza, adding that the developer practises transparency and encourages knowledge sharing where the findings were published on its website.

“It appears that we already have a useful head start in Valencia,” says Khariza.

“We discovered that our principle of working with nature has borne fruit resulting in a hospitable environment for all our residents. 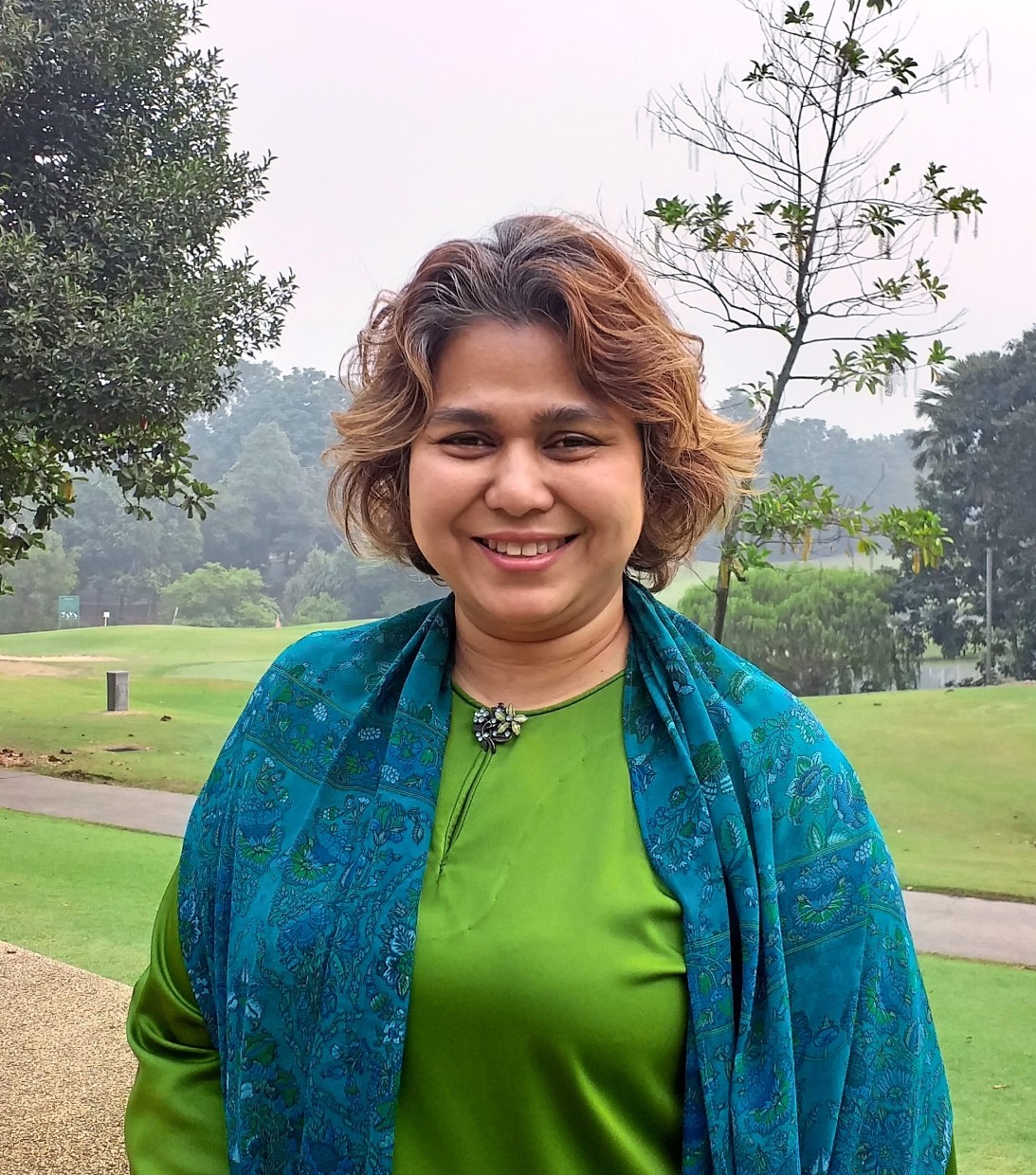 “Our audit in the forested Valencia recorded, among others, 46 species of fauna including mammals, birds and herpetofauna, as well as a diverse and colourful medley of insects,” she adds.

“We have also classified 345 species from 95 flora families, such as ferns, herbaceous plants, shrubs and trees. Of the many fruiting trees found, the pièce de résistance is the Dillenia indica or Indian Simpoh.

“A deciduous tree frequently found on the banks of rivers and streams. Their large-sized fruits are said to be savoured by elephants, thus earning it the moniker, ‘elephant apple’.

“Furthermore, its juicy pulp is rich with saponin and can be used as soap.

“During the audit, we also detected several species of trees that are listed as ‘vulnerable’, ‘near threatened’ and even ‘critically endangered’ in the Red List of Threatened Species under the International Union for Conservation of Nature (IUCN).

“These trees have now been tagged for extra supervision and care.

“Moving forward, we will be engaging a lake specialist to perform ‘lake quality tests’ to ascertain and improve the water quality of all the lakes so that we can reinforce the biodiversity of the aquatic ecosystem as well,” continues Khariza. 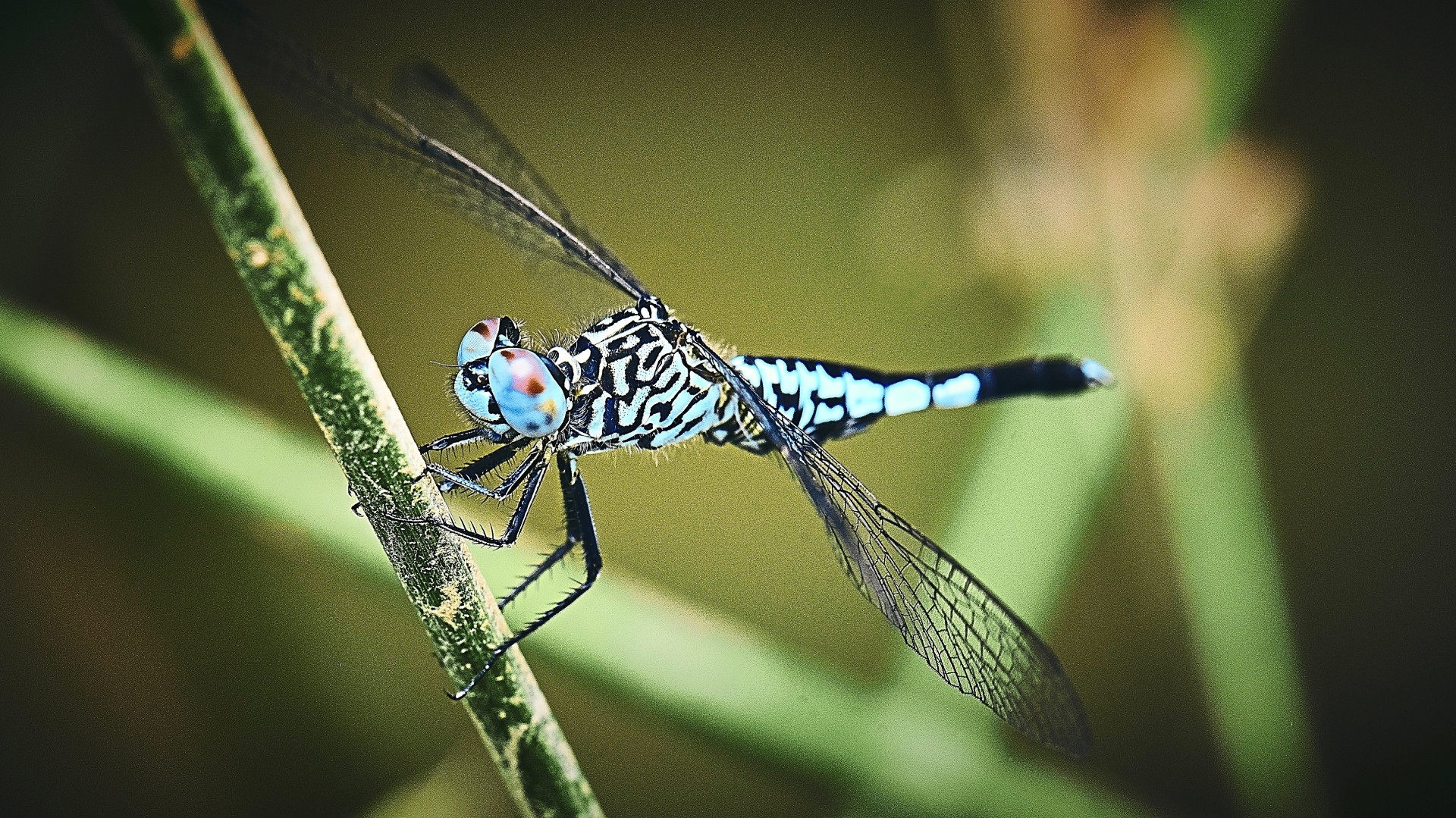 About 46 species of fauna including this Acisoma Panorpoides dragonfly are recorded in Valencia.

It is a known truth that green spaces directly and indirectly enhance our quality of life.

From provision of clean air and water which are corollaries of a healthy ecosystem to outdoor recreational activities for the residents, simply put, a greener lifestyle begets healthier living – a sentiment that is held in common by residents not only of Valencia but also other Gamuda Land’s developments such as Jade Hills in Kajang and Celadon City in Vietnam.

Says Shamina Nordin, “Having lived here for 15 years, Valencia remains a haven for us to come home to after a tiring day at work.

“Waking up to the chirping of birds and spotting squirrels in the garden, the beautiful landscapes go a long way towards relieving stress.

“It goes to show that we have invested in the right property for living closely with nature and thus the right developer for creating it.” 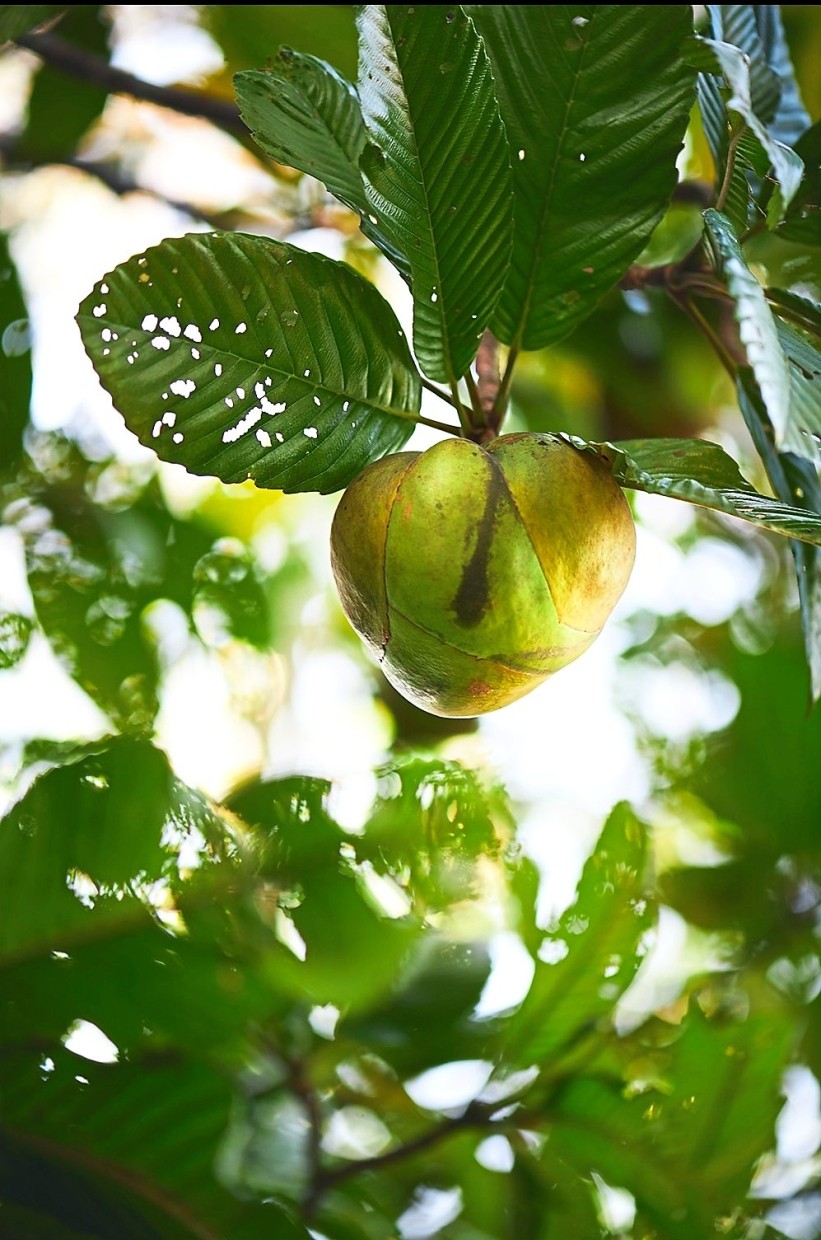 The Simpoh Filipina (Dillenia Philippinensis Rolfe) is a unique species that is found at Valencia.

Promoting eco-ambassadors of the future

Acknowledging that education is the best tool with which to arm its communities, Gamuda Parks has come up with several fun and interactive initiatives to raise awareness and to enlist new recruits into its green school of ideology, GParks Ranger Programme.

These include exciting nature trails called Forest Scientist and informative dialogues, all of which collaborate to equip the residents of Valencia with a deeper knowledge of their surroundings.

These activities were held in conjunction with World Habitat Day on Oct 5 and celebrated at Valencia. 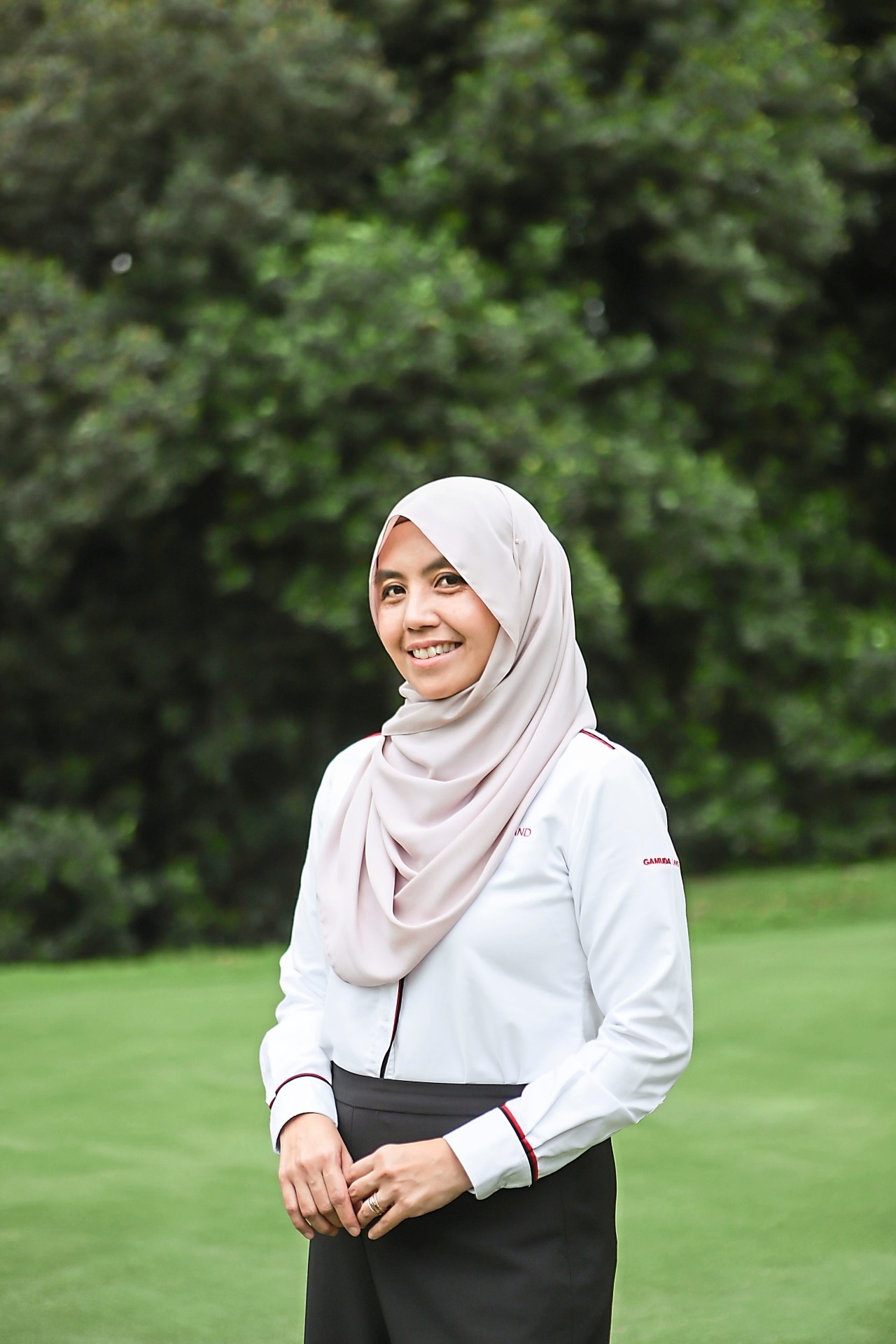 In addition, “Nature Interpretative Signages”, which contain information about the three wildlife hotspots identified by FRIM were placed around Valencia woodland belts.

“Also in the pipeline is a reference book that will exhibit Valencia’s rich biodiversity,” says Khariza.

“We believe that this book will play a key role as a secondary resource to support study of the biodiversity ecosystems within the vicinity of the Klang Gate Quartzite Ridge, one of the largest terrestrial quartz ridges in the world,” she concludes.

Gamuda Land’s long-standing pre-emptive initiative is to foster ecological sustainability in all its developments.

It is a timely and essential acknowledgement of the powerful and symbiotic interdependence of man and nature.

Ultimately, by taking progressive measures today, Gamuda Land is ensuring a sustainable future and, at the same time, discharging its responsibility as a custodian of nature for generations to come.
Article type: free
User access status: 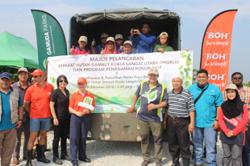 Community enrichment for the Temuan people

Living in sync with nature