Sultan Ismail Petra – a ruler who was close to the people

KOTA BARU: Sultan Ismail Petra ibni Almarhum Sultan Yahya Petra who was the 28th Sultan of Kelantan was very close to the people of the state.

He ruled Kelantan from March 30,1980, until September 2010 when he was confirmed ill and replaced by his eldest son Tengku Muhammad Faris Petra who now bears the title Sultan Muhammad V.

Sultan Ismail Petra took a great deal of effort to be close to the people which enabled the multi-racial populace in the state to stay united.

He was born on Nov 11,1949, at Istana Jahar here and was the only son and the youngest offspring of Sultan Yahya Petra ibni Almarhum Sultan Ibrahim and Raja Perempuan Zainab II.

Sultan Ismail Petra was bestowed the title Yang Teramat Mulia Tengku Mahkota Kelantan at the age of 18 on Nov 11,1967.

On March 30,1980, he was crowned Sultan of Kelantan at Istana Balai Besar here at the age of 31, taking over from Sultan Yahya Petra.

Sultan Ismail Petra suffered a stroke on May 14,2009. He received follow-up treatments at the Universiti Sains Malaysia Hospital, Kubang Kerian.

The Kelantan government then appointed medical specialists to form a medical panel to check his level of health.

However, when Sultan Ismail Petra continued to be ill, the panel decided that he was not capable of ruling the state and it was decided that his eldest son be crowned the new sultan.

On Jan 8,2002, he was conferred an Honorary Doctorate of Philosophy in Political Science from the Ramkhamhaeng University, Thailand.

The Persandingan Diraja ceremony took place at Istana Balai Besar on March 12,1969, in accordance with the customs of the Sultan of Kelantan.

During his reign, a mosque was built on Jalan Sultan Yahya Petra, Kubang Kerian, and named Al-Sultan Ismail Petra Mosque. 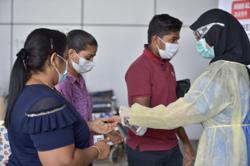