Dr Wee: Those guilty of Adib's death should face justice

"May Muhammad Adib's soul rest in peace and may those guilty of causing his death be brought to justice and face punishment accordingly," the MCA president said in a Facebook post on Friday (Sept 27).

Dr Wee added that he commended the decision made by the Coroner's Court on Friday.

"The decision is sure to come as a relief to the public, especially Muhammad Adib's family," he said.

Dr Wee added that he had been following the developments of the case closely, along with many other Malaysians.

Adib, 24, became critically injured after he and his team from the Subang Jaya fire station responded to an emergency call at the Seafield Sri Maha Mariamman Temple where a riot was taking place last year.

The fireman was taken to SJMC after he was found injured, before being transferred to the National Heart Institute (IJN) for further treatment, where he died on Dec 17, at 9.41pm.

The Coroner's Court has ruled that Adib's death was caused by two or more persons unknown. 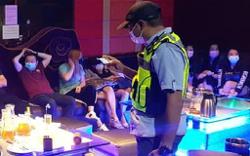