MACC chief commissioner Latheefa Koya, who conveyed the commission’s condolence message, said he passed away at his daughter’s home from heart problems.

Ahmad Said, who underwent treatment at the National Heart Institute (IJN), was buried at

the Kota Damansara Muslim Cemetery at 11.40am after zohor prayers yesterday.

Ahmad Said, who was from Balik Pulau, Penang, was an arts graduate of Universiti Sains Malaysia and obtained a Masters in criminology from the Indiana State University of the United States.

Under his leadership, the name Badan Pencegah Rasuah (BPR) was changed to MACC, and he was made its first chief, although he retired six months before the end of his contract to spend time with his family.

Tan Sri Abu Kassim Mohamed took over the reins from him.

“Last week, the doctors at IJN allowed him to return home and he was taken to his daughter’s house in Rawang.

“May Allah bless his soul and place him among the righteous, ” he said.

His daughter (second child) Nurul Sabila said her father passed away at 11.06pm.

‘’He had a minor heart problem and he was discharged from IJN on Sept 17, and I brought him to my house.

‘’However, he was suffering from breathing difficulties on Sunday evening and we managed to gather the whole family to meet Ayah, ’’ she told reporters after the funeral yesterday. 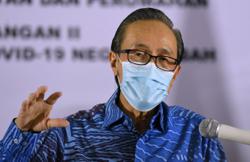