BUKIT MERTAJAM: Toy cars had to be used in court during the questioning of a woman on trial for allegedly driving against traffic on the North-South Expressway and killing another driver.

The model cars were used to depict traffic flow for Ng Pei Ven, 21, who is a registered slow learner, to answer questions from her counsel and the prosecutor during the trial.

During the trial yesterday, Ng cried a few times, saying that she did not understand the questions.

Every question and answer had to be translated by the court’s Mandarin interpreter.

At one point, Lim showed the court a disabled person’s registration card, issued by the Social Welfare Department in 2011, which Ng confirmed was hers.

Children diagnosed as slow learners – having below average intelligence with thinking skills that develop more slowly than the norm – are registered as disabled persons in Malaysia.

During the proceedings, Mohd Amril, who realised that Ng would first look towards her parents seated in the public gallery after each question, had asked magistrate Sri Pracha Nanthini Balabedha for a board to be placed between them to help the accused focus on the trial.

Ng is charged under Section 41(1) of the Road Transport Act 1987 with reckless driving and causing the death of Mohamad Fandi Rosli, 26, on the North-South Expressway at about 7.50am on March 14,2017.

Four other vehicles were also damaged in the incident.

She was ordered to enter her defence yesterday.

Ng told the court that on that day, she was driving back to her home in Sungai Dua after celebrating a friend’s birthday in Juru Auto City.

“While driving, I saw a truck and avoided it and ended up driving in the wrong direction. There were many oncoming cars and I turned on my car’s hazard lights, but nobody came to help.

“I slowed my car down to a halt and fell unconscious. Then, there was the accident, ” she said but could not add any other details.

During cross examination by Mohd Amril, Ng said she got her driving licence nine months before the accident and was unfamiliar with the route she used to go home after attending the birthday party.

“Normally, I only drive to nearby places such as my mother’s factory in Butterworth, ” she added.

Her driving licence has been suspended for the duration of the trial.

On May 13,2017, Ng was freed of a charge of administering drugs to herself after Deputy Public Prosecutor Kamaliza Md Zin told the court that her urine test result came back negative.

Court rules in favour of one RFA journalist 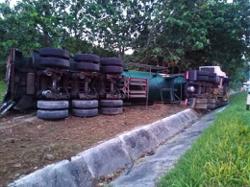