IPOH: Six friends here have fallen victim to a mule accounts scam, with 39 police reports lodged against them over suspicion of cheating involving some RM570,000.

An e-hailing driver, who wanted to be known only as Kok, said he was charged in court in Melaka last month and has another case pending in Seremban.

The 27-year-old said a search on the Semakmule commercial crime police webpage found that his bank accounts had been linked to nine cheating cases.

He said it all started earlier this year after he “lent” his ATM card and shared his bank account details with an “agent” in return for easy income.

“I was jobless and heard about this lucrative scheme from a friend.

“For each bank account, I could get about RM300 in return every month, ” he told a press conference held by Perak MCA Public Services and Complaints Bureau chief Low Guo Nan yesterday.

the card, ” he said, adding that he received RM600 in the first month.

Last month, Kok got a call from the police here to assist in investigation into a cheating case.

“I was then told that I was involved in a cheating case and taken to Melaka where I was held for two days. Only then did I know that I’d been duped, ” he added.

Durian seller Nick, 24, said he was the one who invited Kok and four other friends to take part in the scheme.

He said he first saw a post about the scheme on Facebook by one “Ooi Guo Lun” and got in touch with him.

Nick said he shared six of his bank account cards and had no problem with it in the first few months.

“After the third month, I started to get calls from the banks about questionable transactions and later, all my accounts were frozen, ” he added.

It wasn’t until he got calls from the police in June and July over the cheating cases reported against him that Nick realised he’d been made use of for fraud.

“I really regretted it.

“On top of that, those whom I’d recruited also demanded that I pay what was owed to them. I’ve paid out about RM30,000 since.”

Nick said he hoped the police would arrest the mastermind of the scam and not the victims.

“They should go after the big boss and not small fry like us, ” he said.

Low advised those in similar situations to lodge a police report.

“I also urge the people to check the Semakmule webpage to see whether their bank accounts are being used, ” he said, adding that he believed many youths were unaware of such scams.

“I hope they don’t fall for these quick-money schemes. They are just not worth it.

“Never share your personal details with people you aren’t familiar with, ” he added.

The public can visit http://ccid.rmp.gov.my/semakmule for information or advice concerning financial fraud. 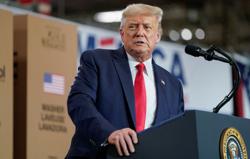 Trump wants to bypass U.S. coronavirus aid talks with executive order. Can he?