Life lesson: Seeing how the people in Aceh struggled in the aftermath of the earthquake and tsunami when she went there on her first Mercy mission taught Raja Riza to appreciate the little things in life. - Photos courtesy of Mercy Malaysia

WHILE looking for clean water to brush her teeth with in Aceh, it struck her, “We have it easy in Malaysia.”

“I went to Aceh about nine months after the disaster, but you could still smell the stench of death and you could see that nothing was back to normal.

“And that particular mission, my first mission, taught me that I must give back. I had spoken to the kids, old people, and just the conditions – it changed my whole perspective on what we actually have every day and to appreciate the little things.”

It was also the first time for a tsunami to hit this area, so it had a very deep impact on the people there, Raja Riza recalls.

Then she met a young boy who was so traumatised that he couldn’t even speak.

“And that was also when I realised that children are the ones who are the most affected in these situations.

“They are the next generation, we must provide all we can – psychosocial intervention and other support, because this will affect them for their whole life.”

This is something that Mercy is doing quite actively in areas of disasters and conflict, apart from medical services and rebuilding work, says Raja Riza.

“We try to create child-friendly spaces to help them deal with their emotions and psychosocial conditions.”

She explains, children deal with trauma differently – some would just come out and cry while others would just keep everything bottled up.

“So, sometimes you give them a paper and colour pencils, and you can actually see what’s in their mind and and how they are taking it as they face the disaster or conflict.”

In areas with protracted conflict such as Yemen, Syria and Palestine, there are critical medical needs and famine, she says.

“It’s heartbreaking – in Yemen, for one, reports say that every 10 minutes, a child dies from nutrition-related conditions such as starvation, infection or disease. Almost 400,000 children below the age of five have severe acute malnutrition, and probably will not survive to celebrate their next birthday.”

Unfortunately, emergency situations today are becoming more severe and prolonged, such as the crises inflicting the Rohingya communities in Myanmar and Bangladesh.

“With that comes new challenges for humanitarian organisations, who need sustainable and consistent funding to continue helping those in dire conditions, ” she notes.

Hence, as part of its 20th anniversary celebrations, Mercy Malaysia is holding a fundraising dinner at Intercontinental Hotel Kuala Lumpur on Sept 28.

Since its inception on Sept 16,1999, Mercy Malaysia has been relentless in its efforts to bring humanitarian assistance to communities in Malaysia and around the world. Today, the organisation has operated in over 30 countries, offering services such as emergency medical relief, post-disaster recovery and reconstruction, and disaster preparedness training. Mercy also conducts water, sanitation and hygiene (WASH) activities in Malaysia and disaster-affected areas such as Bangladesh, Lombok, Palu and Karo.

Mercy is unique in that it’s a cross between a local organisation and an international organisation, says Datuk Dr Ahmad Faizal Mohd Perdaus who took over the reins of Mercy Malaysia from Tan Sri Dr Jemilah Mahmood in 2009.

“We were resolved to be as good as, if not as big as, the major humanitarian organisations.

This year, as an alternative source of funding for their humanitarian work, Mercy started a zakat initiative to facilitate Muslims who are interested to make contributions to help people in need.

Funding continues to be an issue though, says Raja Riza, especially for their disaster preparedness training in Malaysia.

“Frankly, people think we are rich, ” she quips with a laugh. “But all our funding is earmarked for the different missions and programmes.”

Getting new and young volunteers is another challenge, she adds: “I feel that in Malaysia we need to have volunteerism as part of our school curriculum, so that we can instil it in our children from young.

“With this being our 20th year, we wanted to give back to our supporters, and of course our founder, ” says Raja Riza, who first met Dr Jemilah in 1999.

“She was my doctor then, and she was so passionate about starting up Mercy. She told me that I had to join her but I was about to give birth to my first child and I was actually still doing my CLP (Certificate in Legal Practice) then... “ she recollects fondly, joking that she could not escape Dr Jemilah and joined Mercy in 2003.

“I thought I’d chip in with something I’m familiar with. So, I started helping legally first – with Mercy’s constitution, giving advice and things like that, because that was my area of expertise. But I learnt a lot from Dr Jemilah.”

She shares with a laugh that it was a steep learning curve when Dr Jemilah left in 2009: “Five of us had to replace one of her to get things done!”

To mark the organisation’s 20th anniversary, they have also come up with a coffee table book to map Mercy’s journey in the last two decades entitled Echoes Of Mercy: A 20-Year Journey Of Unexpected Kindness.Says Raja Riza, the book begins with Dr Jemilah’s story as in many ways, Dr Jemilah is Mercy.

“Of course, right now, we not only have to maintain that vision but also evolve with the times.

“For example, in the coming years, we will need to focus more on climate change and disaster preparedness training so that communities will know what to do when we get more climate-related disasters and emergencies.

“That will be a big issue in the future, ” she says.

Mercy Malaysia’s 20th anniversary fundraising dinner will be held on Sept 28,2019, at Intercontinental Hotel Kuala Lumpur. For more information or to book a table, email azizah@mercy.org.my 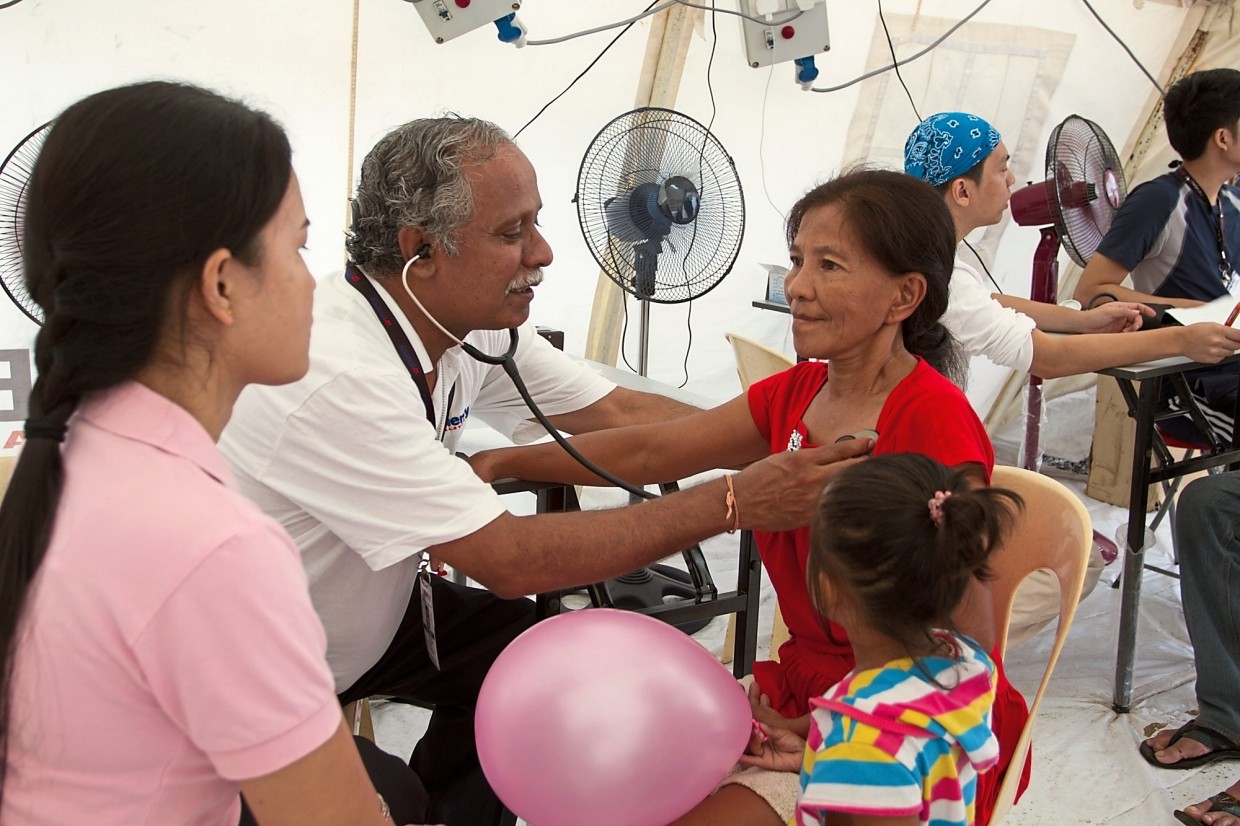 Life lesson: Seeing how the people in Aceh struggled in the aftermath of the earthquake and tsunami when she went there on her first Mercy mission taught Raja Riza to appreciate the little things in life. - Photos courtesy of Mercy Malaysia

Raja Riza: 'In the coming years, we will need to focus more on climate change and disaster preparedness training so that communities will know what to do when we get more climate-related disasters and emergencies.'

Safe space: It’s important to create child-friendly spaces for children in disaster areas and conflict zones to help them deal with their emotions and psychosocial conditions.

Children from the disaster or conflict zone need psychosocial intervention as the trauma they experience can affect them their whole life.