Prince Edward (in grey suit) and Deputy Youth and Sport Minister Steven Sim (in black suit) with some of the Malaysian Gold Award recipients.

CYBERJAYA: A total of 254 young Malaysians received the prestigious "Gold Award" of the International Award for Young People this year.

To make it even more special, the award, also known as the Duke of Edinburgh’s Award, was presented to them by the Earl of Wessex, Prince Edward.

Prince Edward is in Malaysia for a two-day visit. The last time he was in the country was in 2004, also in relation to the Duke of Edinburgh's International Award Foundation.

"If you had not put in the hard work, we would not be here now, so I hope all of you can feel just a little bit proud today of your achievements.

"I hope you will continue and share your passion with other people, and support other young people to have the same experience that you did.

"Today, you can all walk a few inches taller over your achievements.

"There are others who will say that they can achieve what you did, but the difference is you all did it, ” said Prince Edward, in his congratulatory remarks at the award ceremony held here Wednesday (Sept 11).

Sim said the presence of Prince Edward was a testament to the prestige of the award.

"The Gold Award recipients this year are fortunate to have the honour of receiving the award from Prince Edward himself.

"The prince even stopped to chat with all of the recipients, and you could see what it meant to them, ” said Sim to reporters after the ceremony.

Those who received the gold award have to complete programmes related to either community service, physical recreation or skills within 12 months.

The age limit for participants is between 14 to 24 years old. 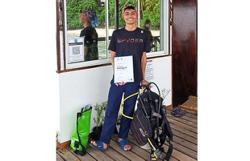