A file picture showing some of the dead fish along Pantai Lido last week.

JOHOR BARU: The Johor Fisheries Department has suggested that a process to replace and treat stagnant water be conducted along Pantai Lido following two separate incidents of mass fish deaths in the area.

Its director Zamani Omar said a water analysis report, which was sent on Aug 28 following the first incident, found high amounts of ammonia and phosphate as a result of the decaying fish.

"Things will get worse if domestic wastewater flows into the reservoir and threatens other aquatic life.

"As an immediate measure, the department has suggested that the ammonia problem be rectified by exchanging pool water where stagnant water must be treated before being released into public waters," he said in a statement here on Sunday (Sept 8).

Zamani added that as for a long-term solution, more efficient irrigation routes should be constructed at Pantai Lido to ensure that water flows in and out according to the tide.

He pointed out that this was to ensure that domestic waste does not accumulate locally and affecting the water quality of aquatic life.

Zamani said currently, there was only one pathway that had been built for such purpose compared to the overall large area of Pantai Lido.

It was reported that the state government may look into ways to improve development procedures at Pantai Lido following mass fish deaths in the area, says Johor Mentri Besar Datuk Dr Sahruddin Jamal.

He said the relevant agencies were still investigating development projects, including reclamation works.

Dr Sahruddin added that if the incident had something to do with the development projects, the state government would consult the relevant agencies, including the Department of Environment and Town and Country Planning Department, to look into it.

The state government was not ruling out land reclamation along Pantai Lido as being the main cause of mass fish death there.

Dozens of dead fish were spotted along Pantai Lido for the second time on Friday just days after a similar occurrence on Aug 28. 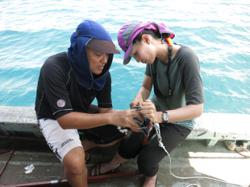