KYOTO (Bernama): Prime Minister Tun Dr Mahathir Mohamad was conferred the Honorary Doctorate of Humane Letters from Doshisha University for his devotion to education and the rule of law.

Doshisha University president Takashi Matsuoka said Dr Mahathir, during his premiership from 1981 to 2003, had introduced the Look East Policy that had not only seen more than 15,000 Malaysian students and trainees sent to Japan, but also contributed to the nation-building of Malaysia.

He said since leading the coalition (Pakatan Harapan) and winning Malaysia’s 14th General Election last year to resume the premiership, Dr Mahathir had undertaken steps to further strengthening the rule of law as the basis for optimism for the resilience of democracy in the midst of a challenging era.

“Dr Mahathir's devotion to education and the rule of law are aligned with an 'education of conscience' which underpins the founding spirits of Doshisha University, ” he said in his convocation address here on Friday (Sept 6).

Meanwhile, Dr Mahathir said he was greatly honoured for the recognition to his work for Malaysia.

“I will always try to live up to the honour that is given to me and try to be humane in my endeavours as I serve my country, ” he said. 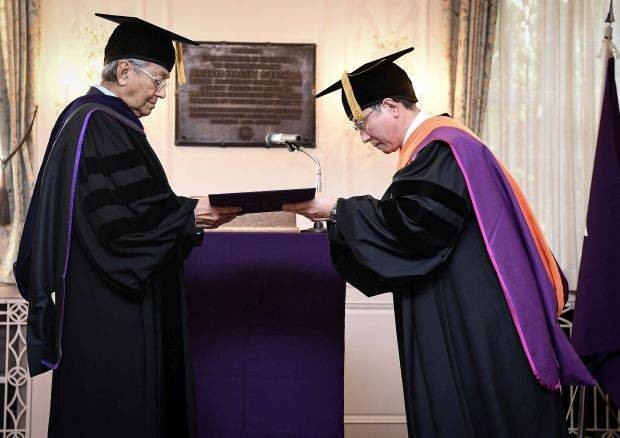 Dr Mahathir received the award from Matsuoka at a special conferment ceremony held at the university’s Amherst House. Also present was Doshisha University chancellor and Board of Trustees chairman Eiji Hatta.

The honorary doctorate was awarded to those who have made remarkable achievements in the progress of academics research, art, and society both nationally and internationally.

Dr Mahathir is the 68th recipient of the award in the university’s 144-year history.

Other notable recipients included the founder of Matsushita Corporation (now Panasonic) Konosuke Matsushita and American economist Joseph Eugene Stiglitz, who is also the recipient of the Nobel Memorial Prize in Economic Sciences and the John Bates Clark Medal.

Established in 1875, Doshisha University is one of Japan’s oldest private institutions of higher learning and has approximately 30,000 students enrolled in four different campuses in Kyoto.

It is also one of Japanese “Global 30” universities and one of the four leading private universities in the Kansai region.

Earlier, the Prime Minister visited Towa Corporation, an ultra-precision semiconductor mould manufacturer, which is planning to expand its operation in Batu Kawan, Pulau Pinang, with an estimated investment worth RM100mil.

He also visited Shimadzu Corporation, an analytical and measuring instruments manufacturer, and was briefed by the company’s top management on its operation before spending some time visiting Shimadzu's research and development centre and showrooms. - Bernama