The drugs were hidden inside the two boxes containing 47 units of rolling board sets and a roti canai dough mixer respectively. The seized methamphetamine weighing about 12.37kg was worth RM618,500, he said.

Zulkurnain said the investigation found that the seized methamphetamine was meant for the Malaysian market.

He said the suspect had entered Malaysia 12 times, adding that this was the first time drugs were found hidden in kitchen appliances.

Meanwhile, in a separate case, on Aug 23, an inspection on the luggage belonging to a 28-year-old Brazilian man who arrived at the KLIA after transit in Dubai, unveiled 99 small black lumps or rocks suspected to be cocaine weighing 1.28kg and worth RM257,400.

He said the cocaine seized was from Brazil.

The two foreigners have been remanded for seven days each at the Sepang Magistrate’s Court and would be charged soon, he said.

Zulkurnain said 38 cases had been recorded thus far in KLIA this year, with the total drug seizure worth RM4.6mil involving nine suspects. – Bernama Cops are watching you: 620 individuals have yet to undergo second Covid-19 tests 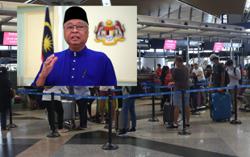 Ismail Sabri: Over 6k screened at KLIA in 16 days, 34 tested positive for Covid-19