KUALA LUMPUR: The incident involving a lift at a PPR (people's housing project) in Kampung Kerinchi, Pantai Dalam, on Aug 2 was due to a brake failure caused by faulty mechanical components.

“Both brakes functioned to stop the car and secured it to a particular floor. During the incident, one of the two brakes had failed to activate, after stopping on the fifth floor," said Federal Territories Minister Khalid Abdul Samad.

“The car then began hurtling down at 2.13 metres per second (mps), which was beyond its normal operating speed of 1.75mps, ” he added at a press conference on Wednesday (Aug 28).

Khalid then said that the lift was equipped with a backup brake that did not trigger during the incident.

“The back-up brake would only trigger if the car exceeded the 'tripping speed', which is 2.18mps," he said.

Khalid added that the mechanical components were operated by a solenoid pair, a type of electromagnetic device used to convert electrical energy into mechanical energy.

He said that the solenoids were taken out for inspection by the maintenance contractor a week before the incident.

“However, no faults with the solenoids were identified during this time, ” added Khalid.

He said that the Occupational Safety and Health Department (DOSH) would seek further maintenance information regarding the solenoids from the car’s manufacturer to ensure a similar incident did not happen again.

In the incident, eight people were injured when a lift fell from the fifth floor of Block C, PPR Kerinchi.

Four of the injured suffered broken legs – including a 10-year-old boy – while the rest suffered injuries to their ankles.

The victims were sent to the University of Malaya Medical Centre for treatment, and

Kuala Lumpur mayor Datuk Nor Hisham Ahmad Dahlan has said that the treatment costs of the victims were borne by DBKL. 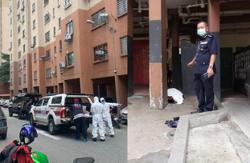