KUALA LUMPUR: It was a night of glitz and glamour for 100 young entrepreneurs who were presented with the 100 Most Influential Young Entrepreneurs (100MIYE) Awards.

Besides being feted to a scrumptious dinner, guests were entertained with performances by well-known talents such as Penang-born singer Jeryl Lee Pei Ling and a violin solo by Dr Julian Lee, who played several favourite tunes of Dr Mahathir and his wife Tun Dr Siti Hasmah Mohd Ali.

In his speech, Dr Mahathir reminded young Malaysian entrepreneurs not to sacrifice integrity and honesty in their pursuit of economic success.

“To some, it may only be about profits, monetary gains and bottom lines.

“But more importantly, as we strive to create successful economic models through entrepreneurship, our entrepreneurs develop noble values such as integrity and honesty, ” Dr Mahathir said at the gala dinner of 100MIYE Awards 2019 on Friday night.

The Prime Minister noted the importance of these values for entrepreneurs wishing to enjoy long-term success in their ventures.

“Without these values, success becomes mechanical and lacks soul, ” he added.

He also reminded young Malaysian entrepreneurs not to let success “get to their heads”.

“Do remember that being a winner is not only when we are accorded the recognition, it is also how we feel within. 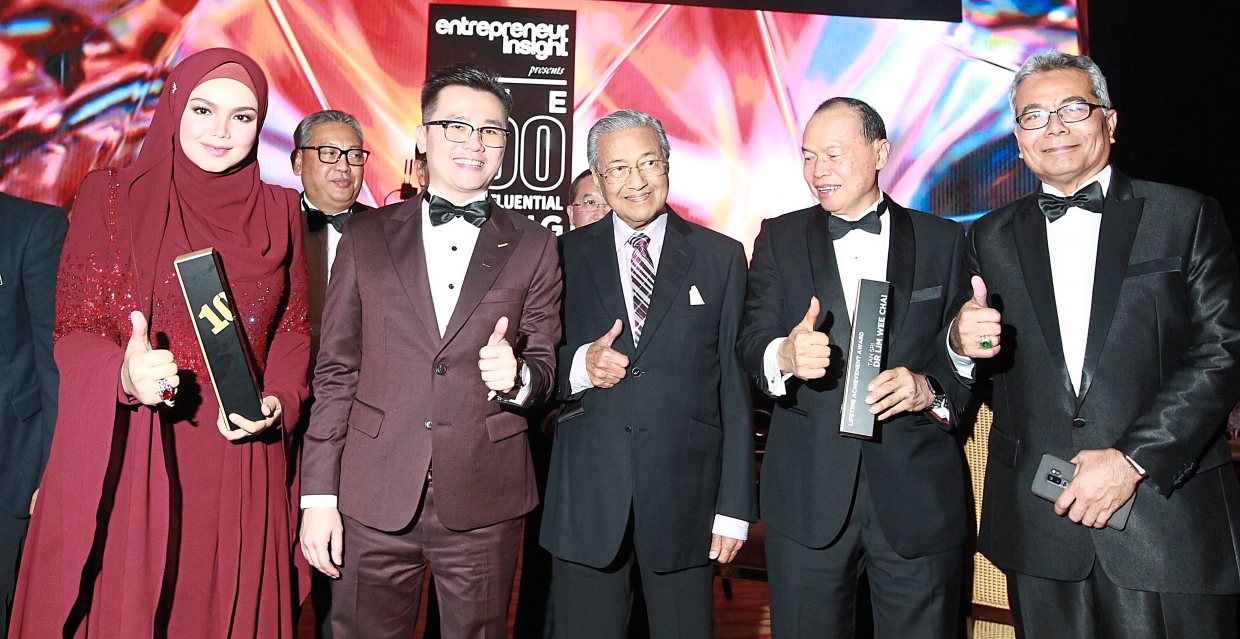 “And success should never (be allowed) to get to one’s head, ” he said.

Dr Mahathir also said young Malaysian entrepreneurs have proven that they can be drivers of innovation and economic growth.

“Sometimes we lament the negative development among our youth.

“However, the emergence of these successful and driven young entrepreneurs sustains our faith in youth and our hope for the future of our nation.”

Award recipients are aged 45 and below and hold a position as founder, managing director or chief executive officer in an organisation, while the Lifetime Achievement Award is given to individuals with at least 20 years of documented accomplishments in entrepreneurship and who have coached and empowered other young entrepreneurs.

Among those who received the awards were Malaysian athletes Datuk Nicol David and Datuk Lee Chong Wei.

Earlier in his speech, 100MIYE organising chairman Datuk K.K. Chua said 98.5% of businesses in Malaysia are small and medium enterprises run by entrepreneurs.

“If we can change Malaysian entrepreneurs, we can make Malaysia a better place, ” he said.

Chua said the 100MIYE accolade is more than just an award as it serves as a platform for entrepreneurs to shine, grow and transform.

The 100MIYE was inaugurated in 2016 through the initiative by Entrepreneur Insight magazine, a publication of Armani Media.

As part of the 100MIYE project, Armani Media has set up the Young Entrepreneurs’ Outreach Fund to nurture young talent through engagement between students and entrepreneurs.