Yet to be found: Anglers suspected of water disruption sabotage 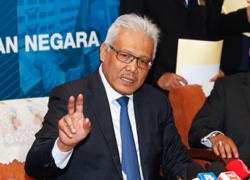 KLANG: The anglers suspected of being responsible for the oil spill at the Bestari Jaya stretch of Sungai Selangor leading to taps running dry are yet to be located.

However, Selangor police are still investigating the matter.

They want to get to the bottom of the mystery as to how the diesel could have spilled from a sand-dredging pontoon into the river on Sunday (July 21).

Selangor police chief Comm Datuk Noor Azam Jamaludin said police were still not able to record statements from the workers said to have seen the anglers.

"They have not turned up here yet, and because of this we believe they (the workers) may be undocumented (illegal immigrants)," he added.

The contractor alleged that a few anglers were caught fishing near the pontoon just before the contamination happened.

The anglers are suspected to have opened the cover of an oil tank on the pontoon to allow fuel to spill into the river after being told to leave the place.

Comm Noor Azam said a statement had been recorded from the company's representative who had lodged the police report. He added that efforts were on-going to apprehend the three suspects.

This resulted in an abrupt water disruption in the state.

By 6am on Thursday (July 25), water supply to all the affected areas had been fully restored, two days ahead of the targeted completion of restoration works

National Water Services Commission (SPAN) chairman Charles Santiago said the police must not dismiss the matter by saying the three alleged suspects could not be found.

"This is a national security matter. What if the water had been poisoned instead of contaminated?" asked Santiago.

He said police must also investigate if the contamination occured due to criminal negligence.

"Why were the oil drums floating on an unused pontoon?" added Santiago.

He said the sand-dredging company which owned the pontoon must be investigated to determine if it had breached any law or regulation by allowing the oil drums to remain on the pontoon which had not been in use for the past two months.

Police are investigating the incident under Section 430 of the Penal Code for mischief by injury to works of irrigation or by wrongfully diverting water. If found guilty, the culprits face a jail term of between five to 30 years, a fine or both.