Wee (left) and Ting speaking on the case.

SIBU: The Sibu branch of the Sarawak Advocates' Association (SAA) wants the police to give a satisfactory explanation after one of its members was detained whilst discharging his duty on behalf of a client.

SAA Sibu president Orlando Chua said on Wednesday (July 24) that Ting Yong Ginn alleged that he was detained and treated unprofessionally by the police when he was
assisting his client in a dispute with an employee at a coffee shop at 9.30pm on July 17. 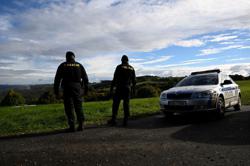