BESTARI JAYA: One of Selangor’s biggest bane is the regular water crisis it faces in spite of being Malaysia’s most developed state.

Only last week, the state’s Sungai Selangor Phases 1, 2 and 3 and Rantau Panjang water treatment plants were shut down due to contamination caused by odour pollution.

The incident caused water cuts to more than a million consumers.

Just when everything was returning to normal, Selangor faced another water crisis caused by another bout of contamination, resulting in further closure of the water treatment plants.

However, all the affected water treatment plants were back in operation at press time yesterday.

Selangor Mentri Besar Amirudin Shari, who visited the Sungai Selangor Phase 2 water treatment plant here yesterday, told reporters after inspecting the place that there was a possibility the second incident was due to foul play if it was not due to negligence.

He said a fuel tank outlet on a sand dredging pontoon was found open, resulting in fuel flowing into the river. 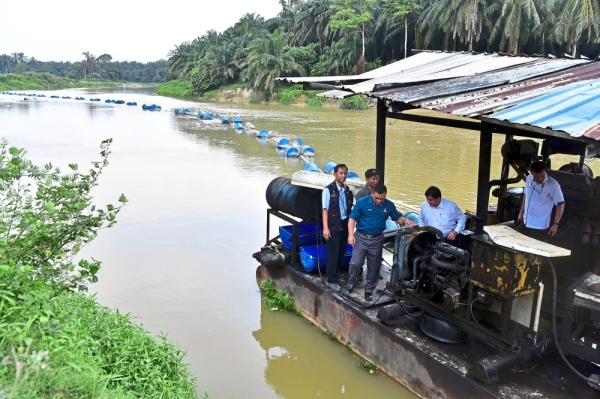 Oil leak: Aimirudin (second from right) checking the pontoon believed to be the source of the water contamination.

Amirudin added the mishap occurred about 6km away from the Sungai Selangor Phase 2 water treatment plant here on Sunday evening.

“The pontoon has been at the location since 2013 but had not been operational the past two months,” said Amirudin.

“I have asked for all pontoons that are no longer in use be removed from the river to prevent further risks,” he added.

Amirudin also said that KSSB must relook its standard operating procedure and disallow pontoons that are no longer in operation to remain on the river and forbid fuel to be stored on those that are functioning.

Some 100 litres of diesel made its way into Sungai Selangor due to the incident.

According to Amirudin, the Selangor Water Management Authority (Luas) and KSSB had started cleaning up the spill from 7pm to midnight on Sunday by sprinkling soap on the affected river surface, placing oil pads to absorb the oil as well as flushing the contaminated stretch with water.

Oil booms were also fixed around the pontoon and surrounding area.

Amirudin said most of the contamination had been countered by 3am yesterday and the situation is expected to return to normal soon.

“We are now waiting for our reservoirs to be filled with water by 6am (today).

“So from 6am to 6pm (today), about 30% of the disrupted water supply is expected to be restored,” said Amirudin.

He added the second incident occurred after almost 97% of clean-up and restoration work had been completed after the July 19 contamination incident.

Meanwhile, Selangor police chief Comm Datuk Noor Azam Jamaludin said at the same press conference that a police report was lodged on Sunday by the company that owned the pontoon.

“Our investigations found two oil drums (on the pontoon) with its outlets open that resulted in 100 litres of diesel flowing into the river,” he added.

Comm Noor Azam also said workers at the site told police that three anglers were spotted fishing from the pontoon just before the incident occurred.

He added the anglers initially refused to leave when told to do so and the workers believe they opened the fuel outlets to release the oil into the river before leaving.

“We are investigating whether the contamination is due to carelessness or an act of sabotage,” said Comm Noor Azam.

When contacted, SPAN chairman Charles Santiago said the company which owns the pontoon should be held responsible and made to pay for the clean-up.

“KSSB must also revoke the company’s licence and it (the company) should be banned from sand mining activities for good,’’ said Santiago.

He added the state government must also take this opportunity to clear all riverbank-based commercial entities and activities in order to prevent future incidents of contamination.