Wee: Youngsters should be allowed to form own political views

PUTRAJAYA: Parents may be influential in the development of their children’s political views but they should not be too worried over if there is any difference of opinion, says Datuk Seri Dr Wee Ka Siong.

“Don’t be too obsessed about determining their views and ideas because early indoctrination can be a dangerous thing.

“This may just cause them to criticise another party without thinking rationally,” said the MCA president.

Dr Wee said parents should also be careful with their words when expressing opinions on current and political issues.

He said youngsters were likely to form ideas on political matters by observing the behaviour of their parents but sometimes, they might pick up wrong attitudes.

“For example, if parents demonised a party using obscene words, their children are likely to mirror this behaviour, so don’t be surprised if you hear them using the same words,” he said this during a panel discussion at the Election Commission’s “Make a Change, Let’s Do It Together” forum. 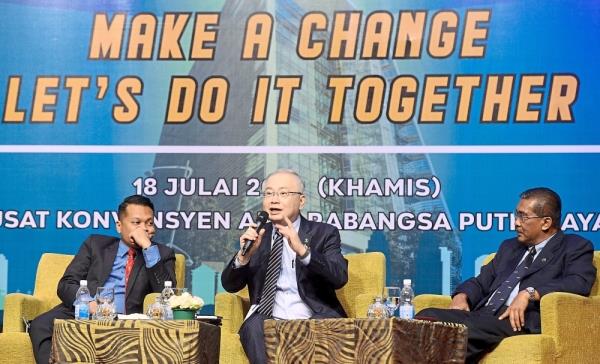 Let the youth think: Dr Wee speaking at a panel discussion at the ‘Make A Change, Let’s Do It Together’ forum. Looking on are Nik Nazmi (left) and Takiyuddin.

Dr Wee opined that both parents and teachers should ensure youngsters were able to form their own political views on neutral grounds.

“There is no need to turn schools or homes into battlegrounds.

“Children need to be taught to be rational thinking individuals by the time they are 18,” said the Ayer Hitam MP.

In a separate panel discussion, Ketari assemblyman Young Syefura Othman said that the commission and the government should introduce a syllabus to help 18-year-olds understand their responsibilities as voters.

“There are times when students don’t even understand the roles of Dewan Rakyat or the Dewan Ne­gara.

“The syllabus should give them a better understanding and link it to their responsibilities as voters,” she said.

Commission chairman Azhar Azizan Harun said that he hoped to meet Education Ministry officials to discuss the possibility of introducing a voters’ education module in schools.

“The module could be implemented in the early years of education like in Australia where it starts in Year Three,” he said.

Azhar said the module would be aimed at teaching pupils their voting rights and would not be a form of indoctrination.

“But it will only happen with the approval of both the government and opposition.

“We will be bipartisan,” he said.