KUALA LUMPUR: The freeze on foreign worker intake in the wholesale and retail sector has been lifted, says Datuk Seri Saifuddin Nasution Ismail.

The Domestic Trade and Consumer Affairs Minister said the freeze imposed in 2009 was now lifted to address difficulties faced by the sector.

He said the move was also to further drive the sector that has become one of the main contributors towards the country's Gross Domestic Product (GDP) growth.

He noted that the wholesale and retail sector had contributed RM110.8bil in May this year.

"However, we have imposed conditions that the stakeholders must take a certain percentage of local workers for every foreign worker employed.

"They are also required to come up with a long-term exit strategy to gradually reduce dependence on foreign workforce.

"We want them to come up with an exit strategy, so that there would be no 'crash landing' (when the foreign worker intake into the sector is frozen again)," he said.

Saifuddin said this after opening the 4th Malaysia International Retail and Franchise (MIRF) exhibition at the Kuala Lumpur Convention Centre on Thursday (July 18).

"It reflects overwhelming confidence of investors and businesses to invest and benefit from our economic growth," he said.

The Malaysian Government had always supported and promoted the growth of the franchise industry.

Of the 877 franchises operating in Malaysia, 65% are local brands.

"We are confident the franchise industry can contribute RM35bil to the GDP next year.

"We need to further boost our capabilities to be world-class players and establish Malaysia as a franchise hub for Asean market," he added.

"It is an incubator trade initiative for startups," he added.

MRCA president Datuk Seri Gary Chua said the three-day MIRF event was one of the largest in South-East Asia, attracting 18,000 visitors from 10 countries.

"Our targeted revenue this year is RM90mil," he said.

At the event, the Bumiputra Designers Association (BDA) inked an MoU with MRCA to create a platform for local designers in retail chains under MRCA. 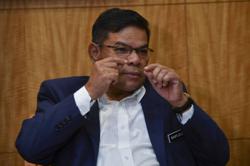