GEORGE TOWN: With a whopping 72 conditions attached to the appro­val of the Environmental Impact As­­sessment (EIA) of Penang South Reclamation, the state is ready even if the reclamation of the three islands will cost more than expected.Chief Minister Chow Kon Yeow said the state would do everything to ensure that these 72 conditions were met even if it required additional expenditure.

Asked if he could reveal what some of the major conditions were, Chow said “we are still studying the content. It is quite a big document”.

“The conditions are not new as these were imposed by various technical committees even during the process of applying for the EIA,” he told reporters yesterday.

On Thursday, The Star ran an exclusive report that the Energy, Science, Technology, Environment and Climate Change Ministry had approved the EIA with conditions.

Chow, however, issued a statement that the report was incorrect.

Later in the afternoon, the De­­partment of Environment faxed in the approval with all 72 conditions. 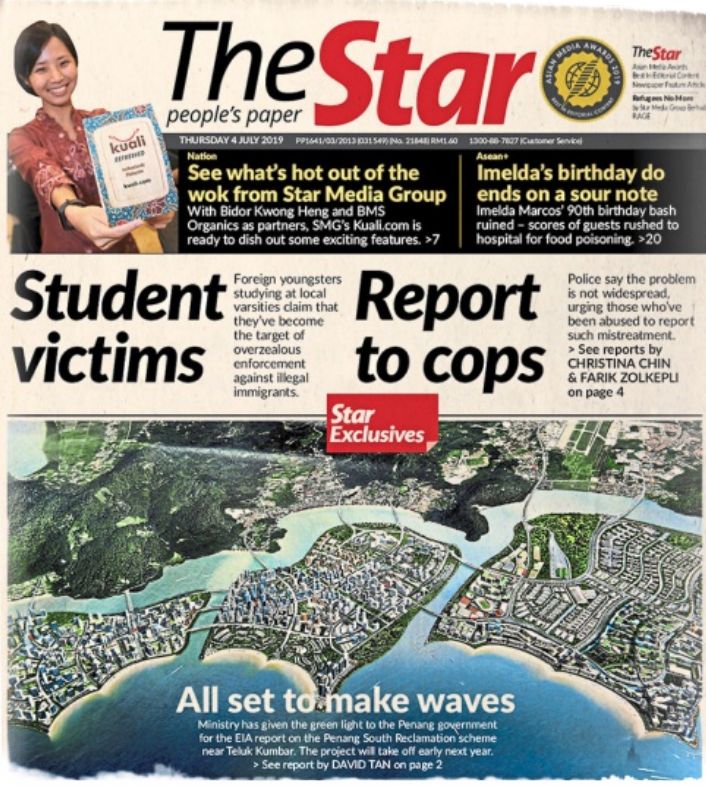 Making headlines: The Star’s front page exclusive story, which reported that the Energy, Science, Technology, Environment and Climate Change Ministry had approved the EIA with conditions.

“We will wait for the official copy to be sent to us,” Chow said, promising to disclose the details next week.

He showed reporters the first page of the fax he received at a press conference during the launch of the Taiwan Expo 2019 at Setia SPICE convention centre in Relau.

“We need time to study the conditions and when we implement the project, we will comply with them all,” he said.

The EIA approval brings prospects of reclaiming the three man-made islands totalling 1,800ha to a certainty.

These islands – which reportedly will bring in more than RM70bil – was mooted as the finan­cing model for the Penang Transport Master Plan, a massive project of several decades that will see Penang gain public transport infrastructure, such as a light rail transit, new roads and even the possibility of commuting around the island by ferry.The first EIA for the reclamation plan, done in 2017, was rejected last year after failing the Fisheries Im­­pact Assessment.

A revised EIA was submitted in February, with additional mitigation measures on the project’s impact to fisheries.