Another feather in the cap for S’wak school band

KUCHING: The St Joseph’s School Band has picked up another international accolade with a second ­place finish at the European Open Championship in Germany.

Competing among 20 bands in the marching show band category, it finished 2.5 points behind Thailand’s Ratcha­sima Witthayalai Marching Band in the final round last Sunday.

Their score of 88 points also earn­ed the band a gold medal for their Romeo and Juliet-inspired drill show titled “Star-Crossed Lovers”. A gold medal is awarded for a score above 80 points, while a score above 90 points receives a gold medal with distinction.

The band members are from SMK St Joseph and St Joseph’s Private School.

“We’re indeed very proud of their achievement. I noticed that my granddaughter spent a lot of time training, even the whole day on weekends, so I hope their victory will teach them that to succeed, it needs a lot of effort, training, patience and hard work,” he said when welcoming the band members home at Kuching International Airport on Thursday night. 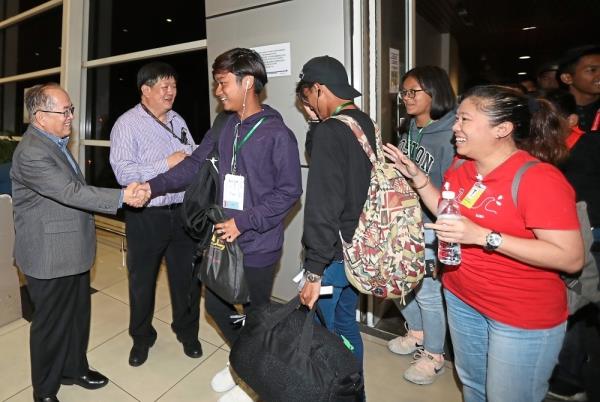 Well done: Uggah (left) congratulating the band members on their arrival at the Kuching International Airport.

The European Open Cham­pion­ship on June 28-30 was part of the International Music Festival in Ras­tede, Germany. About 70 bands took part in this year’s competition.

This was the St Joseph’s Band’s biggest international outing to date in terms of the number of participating bands.

Previously the band won the US Band Association’s Yamaha Cup in the United States in 2015 and the German Open Championships in 2013.

Tuba player Darell Giem, 17, said the band members were “quite nervous” but managed to overcome it as a team.

“On this trip, we learnt to bond together as a family and we will keep this memory in our hearts,” he said.

Saxophonist Harith Ilyas, also 17, said the cooler climate in Germany was one of the challenges faced by the band.

“We’re used to practising in hot and humid weather, so it was a culture shock practising in the cold temperature. We just had to adapt.

“We set high expectations but we said to ourselves, as long as we give our best, it’s enough for us.

“We put a lot of work, time and sacrifice into this and to have this pay off is really nice,” he said.

For percussionist Rahul Tashreem Shah Salwerdy, 21, teamwork was the key to the band’s achievement.

“We managed to pull it off because we did everything together and we got closer every day,” he said.