Natural wonder: Gua Air is one of the caves where a water tunnel leads to an open area surrounded by hills at Gunung Lanno, Simpang Pulai.

A group of caving enthusiasts has been exploring these sites since May last year and has found some things worthy of being tourism attractions and for scientific research.

One of them, Ching Boon Tat, however, said these locations were being threatened by rock blasting activities at quarry sites near the hill.

“What we found were beautiful. Each cave has its own special identity. Among these is Gua Air, a watery tunnel that leads to an open area surrounded by hills.

“There are strange-looking crystal formations on stalactite and also plants that we can’t identify at some locations,” he said here.

Ching also said they saw drawings and writings in some caverns.

“I am no expert but we found what seems like prehistoric drawings of matchstick men and also Chinese writings, which we believe could be from the Emergency era,” he added.

Ching believes that there are about 36 caves in Gunung Lanno.

“My friends and I have visited only about 40% of these,” he said, adding that some caves were no longer accessible due to the rock-blasting activities.

Ching said that since he put up photographs of the caves on Facebook, there had been many requests from people asking him to guide them for a visit.

“Ipoh is famous for cave temples and I think people should know of these beautiful caves, so they can be preserved.

“Perhaps the state authorities could visit these sites and discuss with the quarry companies on how to achieve a win-win solution.

“It would be a waste if these caves are destroyed when preservation efforts could be conducted for tourism or research purposes. Once it’s gone, it will be forever,” he added.

Tan has asked the State Minerals and Geoscience Department and State Park Corporation to do site visits to the caves. 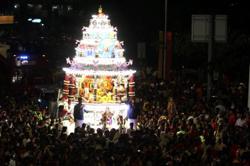