PETALING JAYA: The family of pastor Raymond Koh wants to see closure over his disappearance, saying that it has dragged on for too long.

Susanna Liew also called upon the authorities to carry on with the investigation into her missing husband.

“This is a miscarriage of justice, and we will be relentless in our fight for truth and justice,” Liew told reporters at the launch of the book Where is Pastor Raymond Koh? at the Council of Churches of Malaysia here yesterday.

She said this in response to a recent statement by Home Minister Tan Sri Muhyiddin Yassin that a task force, set up to investigate the matter, would be suspended, pending the court case of Lam Chang Nam.

Last year, the 32-year-old part-time driver pleaded not guilty to kidnapping Koh, and has claimed trial to a charge of extorting RM30,000 from Koh’s son, Jonathan.

Liew expressed hope that the task force would also conduct simultaneous investigations into the disappearance of Perlis activist Amri Che Mat as there were many similarities in both cases. 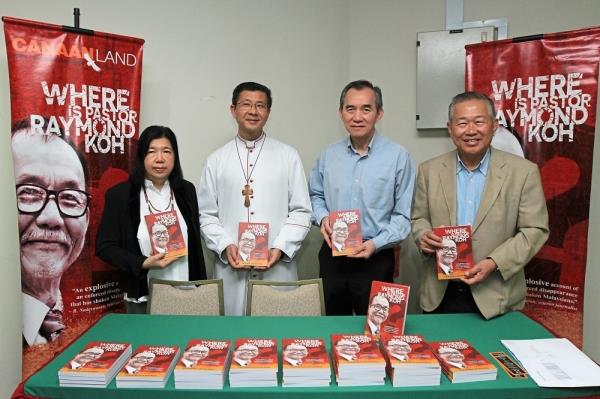 Search for answers: Liew with (from left) the Archbishop of Kuala Lumpur Julian Leow, Damansara Utama Methodist Church senior pastor Daniel Ho, and the co-author of the book Datuk Lee Hwa Beng at the launch of the book.

Amri, who was under investigation for allegedly spreading Syiah teachings, went missing in 2016 after he left his home in Kangar.

In April, a Human Rights Commission of Malaysia inquiry concluded that both Koh and Amri were “victims of enforced disappearance”.

This led to the government setting up a six-member task force to follow up on the findings.

However, Muhyiddin said the task force would start with the case of Amri’s disappearance to avoid sub judice of the court case.

On the withdrawal of former Malaysian police legal unit chief Datuk Mokhtar Mohd Noor from the task force, Liew said she was happy with the news.

“We are glad. The Home Minister has listened to the concerns of the public.

“But that does not mean we are happy with the other five members of the task force. We still ask for independent, impartial and credible members, with representatives from civil society,” she said.

There have also been calls for task force members Datuk Zamri Yahya, who is Bukit Aman’s Integrity and Standard Compliance Department director, and Datuk Abd Rahim Uda, a retired High Court judge to withdraw, due to conflict of interest.