PUTRAJAYA: A list of proposed commissioners for the Human Rights Commission of Malaysia (Suhakam) was submitted to Tun Dr Mahathir Mohamad a week ago, says Minister in the Prime Minister’s Department Datuk Liew Vui Keong.

“The list has been given to the Prime Minister for him to make the announcement,” he said after opening the National High-Level Dialogue on Business and Human Rights here.Suhakam has been without commissioners after its chairman Tan Sri Razali Ismail resigned on April 16, about two weeks before the end of his term, while terms of the other seven commissioners ended on April 25.

A commissioner’s term is three years long. The last round of appointments was made in July 2016 and backdated to April that year.

He said the PMQT had been deliberated following the proposal made by some MPs who wanted it.

“But the fact is we have the MQT and in the past year, we have seen the Prime Minister coming to answer questions in Parliament during MQT and ordinary question time.

“So I think for now we don’t really need the PMQT yet, but when the need arises, we probably can consider that,” he added.

Liew also said the July Parliament session would be the most exciting one so far, with some MPs also describing it as extraordinary because it would see the introduction of several laws.

When asked what Bills would be tabled, he said the abolition of the mandatory death penalty and the Independent Police Complaints and Misconduct Commission were in the pipeline.

Other issues included the constitutional amendment to the minimum voting age, which would allow voting at the age of 18, he said. — Bernama 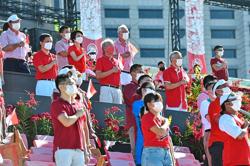