“A certain country is disrupting the globalisation norm through trade protectionism. China is forced to face this trade war.

“We don’t intend to have such conflict, we want to negotiate with goodwill and reach a resolution amicably, but if the other party demands something that is not mutually beneficial, we are forced to respond,” he said when commenting on the US-China trade war.

Bai was speaking at the celebration of the 45th anniversary of China and Malaysia’s diplomatic relationship yesterday.

The celebration was hosted by the Associated Chinese Chambers of Commerce and Industry of Malaysia (ACCCIM) and the China Enterprises Association in Malaysia (CENAM).

Lim said he was confident China would purchase more Malaysian goods, including palm oil, to help Malaysia reduce its trade deficit of RM44.1bil.

In terms of services, he said Malaysia exported RM16.1bil to China while importing RM24.1bil from China, bringing the services trade deficit to RM8.1bil.

“I hope that when I visit China next month, China will have some good news for us,” Lim added.

Lim added that while Malaysia is a beneficiary of the US-China trade war with trade and investment from both countries redirecting to Malaysia, the benefit is merely short-term.

He said Malaysia is reassured that China does not seek to prolong a trade war.

“Malaysia endorses China’s position to seek an amicable solution based on mutual respect and mutual benefit to all parties,” he added.

“I also wish to welcome an ongoing official visit to China this week by a delegation of DAP members led by Lim Kit Siang, a delegation of religious people led by Minister in the Prime Minister’s Department Datuk Seri Dr Mujahid Yusof, and a delegation led by Energy, Science, Technology, Environment and Climate Change Minister Yeo Bee Yin,” he said. 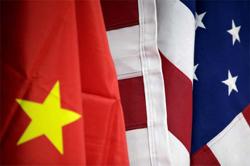