His apartment is just wide enough to fit a single bed, and long enough for a computer table, a pantry, a foldable dining table and two shelves full of folders containing information on what he calls “the big fish” – suspected drug lords.

As we walk through Temple Street, nearly a dozen people –street vendors, homeless people, drug addicts – stop to greet him. He responds warmly in Cantonese.

After nearly 35 years of working with prison inmates, the poor, and the destitute, he has earned the respect of the community.

The past few years have seen him take on an altogether bigger challenge - dismantling drug trafficking syndicates in Hong Kong, all the way back to their source countries.

He has followed the trail of evidence provided by imprisoned drug mules to Colombia, Brazil, Tanzania, Kenya, China, Thailand and more, where he conducts his own undercover operations to expose the big fish to local authorities.

And now, he has set his sights on Malaysia. 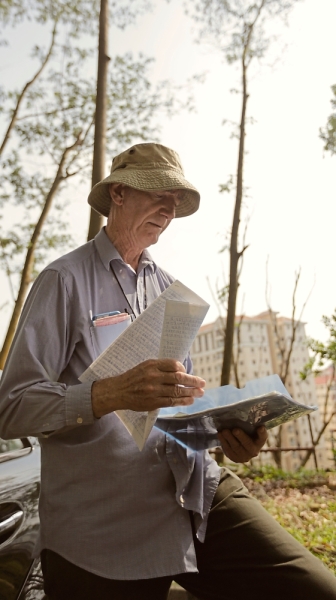 Over the past year, Wotherspoon has come across nearly 30 Malaysian drug mules in Hong Kong prisons, and he believes many more – like Shirley’s 15-year-old friend – slip through multiple times. Wotherspoon believes only 10% of drug mules get caught, meaning that as many as 300 other young Malaysians could have already made “successful” drug runs to Hong Kong in the past year alone.

And that’s not including the thousands going to other countries. Police statistics in 2018 showed over 430 Malaysian drug mules in prison around the world.

“I think it’s absolutely evil what these drug barons are doing. They recruit these innocent, impressionable young people who are desperate for money and make them do their dirty work,” said Wotherspoon.

“While these young people end up in prison for over 20 years in some cases, these big fish get away with it. It’s just awful. And in some cases, they send the mules to countries with the death penalty - it’s like sending them to their deaths!”

Together with journalists from R.AGE, Wotherspoon is working hard to help Shirley and the new glut of Malaysian mules being arrested in Hong Kong, “almost one every week”, according to Wotherspoon.

If he can find evidence that proves the mules were tricked or coerced into carrying the drugs, or help the mules provide enough information for authorities to make an arrest of a syndicate leader, it could shave years off their sentences, at the same time put high-level drug traffickers behind bars.

It’s a mission that drives Wotherspoon to take some incredible risks, like walking straight into a well-known drug spot in Sao Paulo, Brazil to confront suspected Nigerian traffickers, or fishing for drug peddlers in China armed with hidden cameras.

“Here’s the audio recording of me being threatened by some (alleged) drug dealers,” he said, playing back the clip from one of his recording devices. It sounds harrowing even on playback, but Wotherspoon hardly flinches. He’s done more than his fair share of risky work around the world.

In Malaysia, he pieces together bits of information given to him by the mules in prison to track down their recruiters, waiting for them at their alleged hangouts, recruiting spots, or even homes, so he can confirm their identities and get Malaysian authorities to act.

If he can manage that, he just might be able to buy a few precious years of life back for mules like Shirley. And if the mules are indeed proven innocent, they could even walk free.

It’s Wotherspoon’s second trip to Malaysia. He has visited 18 families across the country – including Shirley’s – in less than three weeks, painstakingly collecting information and taking time to assure the families that there is hope.

Most mules will face around 20-30 years in prison, depending on the amount of drugs they were carrying.

But Hong Kong law allows mules to have sentences reduced by one third if they plead guilty early on. Another third of the sentence is suspended for good behaviour, meaning it will only be activated if the prisoner does not behave.

So if the mules plead guilty, they could be out in 7-8 years – provided they don’t get into trouble in prison. Plead not guilty, and they could face the full 20-30 years (again, depending on good behaviour) if they lose their case.

Shirley is only allowed one 10-minute phone call a month, something which her parents wait anxiously for every month.

“She’s always crying when she calls,” said the father. And she’s always asking if she should plead guilty or not.

It’s an impossible decision, especially for parents who want to believe their child is innocent, but have zero evidence. The months pass, and Shirley’s parents still don’t have an answer for her.

In the meantime, Wotherspoon gets to work finding evidence. It’s time for him to go “fishing” – that’s when he tries to locate the drug lords and get information or a confession out of them, armed with nothing but a hidden camera and an almost reckless sense of optimism.

“They won’t do anything to an elderly man like me,” he said. “At least I don’t think so.”

At his age, the work can be gruelling.

On this particular evening, he’s following a set of vague directions given to him by an inmate to locate an apartment block in a Kuala Lumpur suburb, where an alleged Nigerian syndicate leader lives.

The address is incomplete. There is no block or unit number. All the inmate recalled was what floor the unit was on, so Wotherspoon had to go up every single apartment block in the area, asking tenants if they recognised the alleged leader using an old photo.

“No luck today,” he said, sighing. He had tried for around four hours.

At every point on these “fishing” operations, he risks being targetted by syndicate members.

“Every time I get tired doing this, I close my eyes and picture these young mules in prison and their poor families, and I find the energy to keep working,” said Wotherspoon.

It helps that he has a healthy sense of humour, too. In one meeting with us, he says the number of drug mules arrested at airports is just “the tip of the iceberg”. He quickly follows up with: “That’s a meth joke, by the way. Get it? Ice-berg?”

But on this particular day, having worked an entire day only to come back empty-handed, Wotherspoon is struggling to find a silver lining.

“The real tragedy here is that I’ve given this information to the authorities in the past, but they did nothing!

“That’s why I do this myself. I understand that the authorities have their procedures which take time, but I can’t wait anymore. There are prisoners back in Hong Kong who need this information in court.”

Today’s “fishing” operation might have been in vain, but there is good news for Wotherspoon. A senior narcotics officer has heard of Wotherspoon’s work, and is determined to meet him before his trip is over.

On top of that, a call comes in from the R.AGE headquarters – the journalists have just managed to establish contact with a few mule recruiters on social media.

Posing as potential mules, the journalists now plan to meet one of these recruiters, and see if they can find any useful info for Wotherspoon.

* All names have been changed to protect the families of those involved. Read the next chapter tomorrow in The Star and at rage.my/drugtrade. The Sting (out tomorrow in The Star)

OUR undercover journalist has been sitting at a coffee shop for about an hour, waiting for the recruiter to show up.

As with most undercover operations, it’s the wait that’s the most nerve-wracking. Things tend to fly by once the target arrives.

The journalist has already spoken to the target on the phone once, after contacting him via a job recruitment post on a Facebook page. We found dozens of similar posts across Facebook.

He gave vague details about a “high-earning job” she could do for him - in Hong Kong.

“But you will have to be brave,” he said via text. He’d explain more in person.

* Read all previous chapters of The Malaysian Drug Trade at rage.my/drugtrade.