IPOH: To the out-of-towner, the Pasir Pinji neighbourhood here is where you go for yong tau foo under the “Big Tree Foot”.

Or where you have to line up for the pastries outside a popular biscuits shop.

It’s also a political hotbed come every general election with rival camps battling it out for the votes of the mostly Chinese folk here.

But for now, the residents are dealing with a referendum: should the Pasir Pinji wet market in their midst be rebuilt and the traders locate elsewhere temporarily during the reconstruction?

A two-day public voting is being held to decide whether the 60-year-old dilapidated market should be rebuilt or to just let things be.

Counting of ballots is expected to take place after 5pm today.

The traders are divided over the rebuilding plan and the referendum will determine the outcome.

“Having to relocate to a temporary market (while the rebuilding takes place) is an issue,” said a trader, who only wished to be known as Chang, 47.

Chang, who disagreed with the rebuilding of the market, said: “How will the traders move all their stalls, furniture and whatnot during the process?”

He is worried that he may not get back a lot with the same size should he be relocated to a new market.

“We are worried that the relocation process will affect our business,” he said. 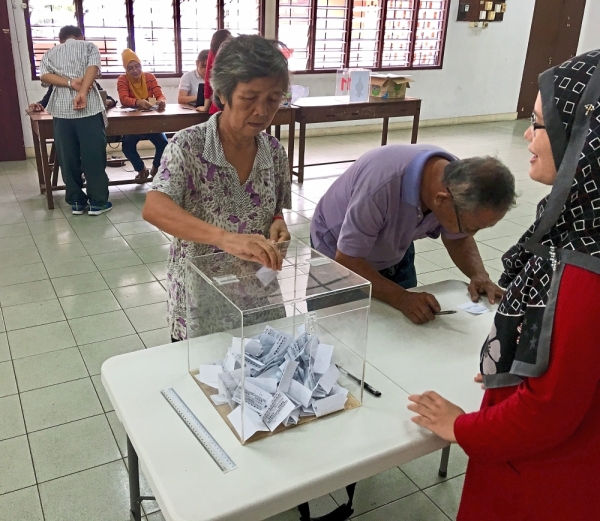 City folk casting their ballot to determine the status of the 60-year-old Pasir Pinji market in Ipoh.

Chang felt that a minor renovation was all that was needed.

“The Ipoh City Council should just fix what needs fixing and carry out regular maintenance. That’s all this place needs,” he said.

The public voting process was called by Pasir Pinji assemblyman Howard Lee Chuan How to allow city folk to determine the fate of the market.

Some 10,000 ballot papers were printed for the exercise, which is conducted by the city council.

Another trader, Chee Loke Fatt, 56, said the government should not waste money to build a new market.

“Even with a new market, it will become dirty again after few years. So why build a new one?

“The city council hardly comes by to clean up the premises, so I don’t expect them to keep the new place clean either,” he claimed.

Chee said it was better for the allocated RM2mil to be used to build a temporary market to refurbish the current one.

Kuih seller Lie Mei Lee, 54, said she felt that it was necessary to rebuild the market.

“I was one of those who initially objected to the plan but after attending a public engagement session, I think it’s a good idea.

“The traders must look at the bigger picture. Nothing is troublesome if we are sincere in wanting the best for all,” she said.