He said even though he applied for membership late in December or early January, it was still unclear to him if he had officially been accepted as a member.

According to Hafez, Tun Dr Mahathir Mohamad said he was a member when he came to Sabah on April 6. However, he was currently still seated among independent candidates in Parliament.

"I'm seated with the independents.

"Usually, once the Prime Minister announces you're in, they will change your seat. That's how you know you're officially in the party.

"I will wait. It is best to let the Prime Minister to announce," he told reporters at the Sabah Bersatu chief coordinator Datuk Sewri Hajiji Mohd Noor's Hari Raya open house in Tuaran on Thursday (June 20).

Hafez, the eldest son of ousted former chief minister Tan Sri Musa Aman, was among the top elected leaders who left Sabah Umno in December to position themselves as independents before joining Bersatu on April 6.

Hafez was not among the names of four Sabah MPs joining the party on March 15 in Putrajaya.

He was also not among those officially accepted during the launch of the party on April 6 in Kota Kinabalu.

Hafez's name was not announced then and he was not present at the party's launch on April 6.

Hafez said that it was a collective decision to leave Sabah Umno leaders led by Hajiji and it was not a personal decision.

"I don't want to speculate but we want to strengthen the Bersatu's numbers. "The numbers in Parliament is not as big as PKR and DAP. We are the size of Amanah, but we hold a significant role," said Hafez whose election victory in Sipitang was being challenged by the losing Parti Warisan Sabah candidate.

The Federal Court, is expected to make a decision on the appeal against the Election Court's decision to throw out the case on June 26.

Hajiji, meanwhile, said that he believed Hafez was already a member of the party as he had applied much earlier than them.

He said that Hafez was proposed as a Sipitang Bersatu division protem deputy chief. 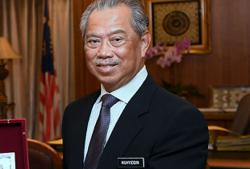