RM283k's worth of illegal timber seized near Sibu

SIBU: Public tip-off led to the seizure of 90 illegal timber logs worth RM282,500 by a team of enforcement led by 10th Batallion General Operation Force (GOF) on Wednesday (June 19).

The other agencies involved in the operation included two officers each from the Sarawak Forestry Corporation (SFC) and the Security and Enforcement Unit in the Chief Minister's Office.

10th Battalion GOF Commander, Supt Sanudin Mohamad Isa, speaking at a press conference on Thursday (June 20) said the team laid ambush on an illegal logpond near Jalan Narasit, which is the road between Sibu and Bintangor.

"The team waited for one hour when a man showed up.

"The man admitted to having been hired by his boss to look after the logs," he added.

The 37-year old man was subsequently arrested and the authorities would be going after the owner.

The team seized the timber logs of various species together with an excavator from the site.

"We believe the logs were from trees fell down somewhere in the area and kept in the temporary logpond. Once the logs have been sold to buyers, the operator would abandon the logpond," he added.

Supt Sanudin said the case was being investigated under the Sarawak Forestry Ordinance 2015.

"We welcome public tip-off as we want to put a stop to illegal felling of tree as such action is not only causing the government to lost in revenue from timber royalty but also destroys the environment," he said. 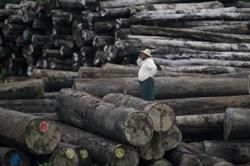 Over 3,400 tonnes of illegal timber seized in Myanmar