Johor to hold competition to find new variety of durian

JOHOR BARU: Johor will be holding a one-of-its-kind audition round to find the next big thing in the durian world that can rival the likes of Musang King and other established varieties.

State Islamic Affairs, Agriculture and Rural Development Committee chairman Tosrin Jarvanthi said this effort was in line with Johor’s position as Malaysia’s main producer of the king of fruits.

“We are the biggest durian producer in the country with Pahang and Sarawak in second and third places respectively.

“Now, we want to look for a new variety of durian that is able to cement our (leading) position,” he told a press conference at the state Agriculture Department office here yesterday.

Tosrin said the search for a premium-­grade durian would take place during the Johor Agriculture Expo and Fruit Fair 2019.

Themed “Everything Durian”, the event will be held at Kampung Abdullah in Segamat from June 28 to 30.

He said among its highlights would be the first-ever Durian Unggul competition, which is held to find the new durian variety, and an all-you-can-eat durian feast.

The competition, he said, was to identify and find new breeds that had yet to be registered with the Agriculture Department’s list of national crops.

“Durian Unggul means durians that are yet to be listed and have the potential to be commercialised. It includes durian kampung.

“Johor’s most famous variety is Durian Hajah Hasmah or better known as Durian IOI, and we are confident of discovering a new one, which will taste even better, through the festival,” he said.

He also said to encourage more participants to the competition, the winner of the Durian Unggul would get RM1,000 cash and other contestants will also stand a chance to win prizes. 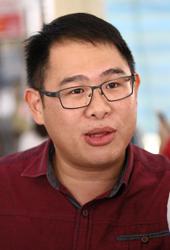