KOTA KINABALU: A power struggle within the Institute of Development Studies Sabah (IDS) has ended after Chief Minister Datuk Seri Mohd Shafie Apdal stepped in to settle the issue.

The tussle between the IDS chairman Tan Sri Simon Sipaun and the organisation's chief executive officer Datuk Johan Ariffin Samad has resolved with Sipaun staying on as chairman.

Johan, whose termination of service by IDS on May 31 was seen as a move to oust him, will be given another position in a different organisation.

"I called them both and it is already resolved," said Shafie.

"Sipuan and Johan are both are my friends, colleagues and supporters – but I wanted a solution where we can realise a better understanding.

"Sipuan will still be the chairman. For the CEO, I will discuss this further and find a solution so that he (Johan) will have

somewhere else to go," he told reporters after presenting a keynote address at forum on New Sabah organised by IDS here on Tuesday (June 18).

"The IDS is important to the state government as it can play a big role when we are facing the 12th Malaysia Plan," he said, adding that a new CEO for IDS would be decided in due course.

During an IDS board of directors meeting chaired by Sipaun on May 31, it was decided through a secret ballot not to renew Johan's appointment as CEO on expiry of his six-month probation.

This triggered a public spat between the two men.

The IDS is a Sabah government think-tank which helps the state administration to carry out studies, research and also formulate policies. 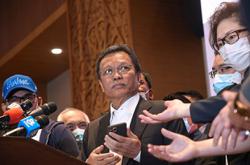