R.AGE editor Ian Yee accepting the World Digital Media Award in Glasgow for the #StandTogether kindness campaign by R.AGE and SP Setia. The award recognises the best digital media campaigns by news publishers around the world.

The campaign was presented the award during a gala ceremony at the World News Media Congress in Glasgow, where some of the world’s largest news organisations were gathered.

#StandTogether was the only winning project from Southeast Asia. The other winners were The New York Times, The Guardian (UK and US), Jota from Brazil, The Los Angeles Times, Arre India, Aftonbladet from Sweden, and AJ+ Espanol.

“We’d like to dedicate this award to all the students who really made the #StandTogether campaign a success with their inspiring efforts to spread kindness,” said R.AGE deputy executive editor and producer Ian Yee. The #StandTogether team has been funding and empowering schools across the country to run their own 'Kindness Projects' as a way to end hate and intolerance in society. Pictured here is SP Setia general manager (property north) Ricky Yeo during a 'Kindness Workshop' for schools in Alor Star.

Yee accepted the award on behalf of the #StandTogether team, which includes the main organisers R.AGE and SP Setia, as well as supporting partners including Unicef Malaysia, Digi, International Medical University.

“The kind of hatred we see online today has become so toxic, but these students are showing us a way forward, by reminding us that only love can drive out hate,” added Yee.


The goal of the #StandTogether campaign is to empower Malaysian students to spark a kindness revolution across the country, starting by lobbying the government for a National Kindness Week in all schools.

They succeeded when Education Minister Dr Maszlee Malik pledged his support for the campaign late last year, and the Ministry followed suit by endorsing the National Kindness Week programme to all schools.

Students across the country played a major part by developing and organising “Kindness Projects”, some of which have been adopted as permanent programmes by their schools.

The campaign came about after Setia’s top management came across a horrific cyberbullying video which had gone viral, and they approached R.AGE to collaborate on a high-level solution.

The award jury’s notes praised the collaboration for “bringing together and integrating editorial interests, sponsor objectives and audience needs”. 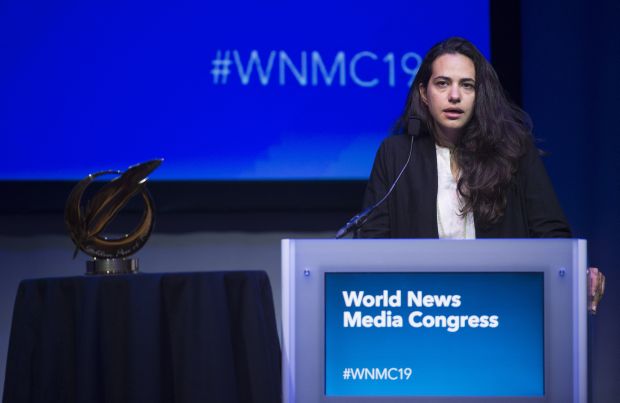 Saudi journalist and filmmaker Safa al-Ahmad said she was "honoured and heartbroken" to accept the Golden Pen of Freedom on behalf of murdered journalist Jamal Khashoggi.

“Some people think that it’s a tough, dog-eat-dog world out there, but I believe that people working together to solve problems is the best way,” said Setia CEO Datuk Khor Chap Jen during an earlier interview about the campaign.

“When people feel kind towards one another, they will do things to help because they want to. Fear only makes people work because they have to, and the results won’t be as good.”


Murdered Saudi journalist Jamal Khashoggi was also honoured earlier during the World News Media Congress with the Golden Pen of Freedom award and a standing ovation from his peers.

Khashoggi was a vocal critic of the Saudi government and had gone into self-imposed exile in the United States. He was killed during a visit to the Saudi embassy in Istanbul to collect documents relating to his upcoming marriage.

“Despite his enormous love for his homeland, he could not bring himself to ignore where it was going,” said World Editors’ Forum president Dave Callaway, who presented the award. “He continued to speak out, and it cost him his life.

“We stand for a united effort among the global media to hold tyrants and governments accountable for their actions to suppress free speech and inhibit the growth of free societies for all their people.”