Helping hand: Jeevithan talking to some of the children he looks after.

ALOR SETAR: For the past seven years, G. Jeevithan has been keeping a lookout for children left behind by their parents who are drug pushers or users.

“We try to track down their extended family and do a background check on them, so that we can find a suitable home for the child,” he said.

At present, he has about 30 children under his watch.

Some of them are staying in charity homes while others are with their relatives, whom he would visit twice a month.

He would also go to their schools to speak to the teachers about their behaviour and their progress in class. “Their neighbours would also help to keep an eye on the kids,” said Jeevithan, 27, who runs an events management company.

He said he would keep an eye on the children until they turn 17.

“School transportation, meals, groceries, tuition, books, stationery items and other necessary expenditures are all borne by me. I make sure they get new uniforms each year.”

Since most of their relatives are poor or are elderly, he said he would also offer extra groceries to the families who are providing shelter for these children.

His intention, he said, was to ensure that these school-going children would not go astray.

“We try to keep tabs on them as much as possible and make sure there are people around them to provide support and advice,” he added.

“These are children who need attention as they are susceptible to getting involved in the same activities as their parents.”

Over the years, he had also bailed out eight juveniles accused of drug-related offences.

Since 2014, Jeevithan has helped about 500 needy families under his Family Outreach Programme where he would provide them with basic necessities, deal with their health issues or help them get back on their feet again.

“I believe everyone should give back to the community. Even if you do not have enough money, you can give service instead.

“Some people do not need your money, They just need you to listen to their problems,” he said.

Jeevithan has been inspired by his mother.

“As a kid, I saw how my mother would visit orphanages and give food to the needy,” he said, adding that he started doing social work when he was 20.

“My main focus is children as they are helpless. Most of them are from poor broken families with not much care, love and guidance.

“Their parents usually are involved in criminal activities, usually pushing drugs,” he added.

The children, he said, were referred to him by people who knew about him and his team.

Jeevithan said he does not take donations and that his staff would help him keep an eye on the children.

Each month, he spends about RM5,000 for the children’s necessities.

It is entirely funded through his company. 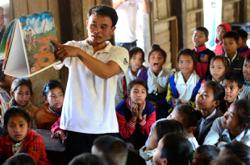 Science, She Wrote 21h ago