JOHOR BARU (Bernama): Police have identified the owner of the grey Proton Wira car that sped off when ordered to stop for an inspection at Jalan Taman Persiaran Sri Putri, Taman Putri, near Kulai Saturday (June 1).

Johor police chief Datuk Mohd Khalil Kader Mohd said efforts to locate the owner of the vehicle were made to determine involvement in any criminal case.

"The suspect’s reckless driving endangered other people, in addition to not following police orders to stop.

"The car was pursued by several police vehicles, making it compulsory to identify the suspect to ascertain if he was involved in any criminal case,” he told reporters here Sunday (June 2).

A shot was also heard fired towards the speeding vehicle, but the two suspects escaped into the bushes near Taman Murni Jaya, Layang-Layang, near Kluang.

In another development, Mohd Khalil expressed his condolences to the family members of a policeman who was killed while his colleague was seriously injured after being hit by a motorcycle.

The policemen were conducting an inspection on a van at Jalan Perisiran Perling at 6.40am Saturday.

He said the police were in the process among others, obtaining insurance claims, and assisting the families of both policemen.

On Saturday, L/Kpl Mohd Ishraf Ismail, 27, was killed on the spot due to serious head injuries while L/Kpl Muhammad Syakir Safwan Khairudin, 29, and the 36-year-old motorcyclist, who sustained serious injuries, were being treated at Sultanah Aminah Hospital. - Bernama 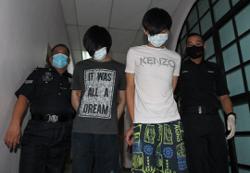 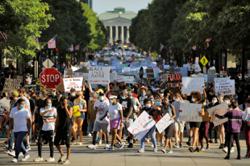 Curfews and clashes as US race protests escalate