Policeman killed, colleague hurt as bike rams into them

JOHOR BARU: A 27-year-old policeman was killed after he was hit while on duty by a speeding motorcycle at KM23.2 of the Second Link Expressway here on Saturday (June 1).

The impact of the crash also flung another policeman onto the road, injuring him.

Lance Corporal Mohd Ishraf Ismail, who was conducting a routine check on a van, was killed on the spot from serious head and body injuries in the 6.40am incident.

His partner Lance Corporal Muhammad Syakir Safwan Khairudin sustained light injuries and was reported to be in a stable condition.

Both were sent to the Sultanah Aminah Hospital.

The victims, from the Tampoi police station’s mobile policing vehicle (MPV) unit under the Johor Baru North police district, were about to end their shift when the incident occurred.

“An incoming motorcycle then rammed into the two policemen. The deceased was pinned to the rear of the patrol car, while his partner was flung due to the impact.

“The motorcyclist and the injured policeman are currently being warded and treated for their injuries in the hospital,” said ACP Mohd Taib in a statement.

He added that initial investigations revealed that the road conditions were clear during the incident, and police were investigating the case under Section 41(1) of the Road Transport Act 1987. 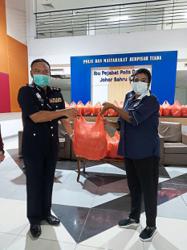 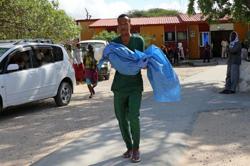