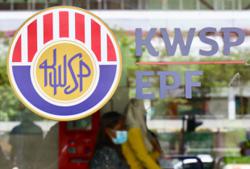 The Employees Provident Fund is the main source of savings for many Malaysians which they look to when they retire.

KUALA LUMPUR: The Employees Provident Fund (EPF) has reported total investment income of RM9.66bil for the first quarter ended March 31, 2019, which is lower than the sum recorded in the corresponding quarter of last year.

Equities, which made up 39% of EPF’s total investment assets, continued to be the main revenue dri­ver, contributing RM4.16bil.

The revenue sum is equivalent to 43% of total investment income for the first quarter.

Mohamad Nasir said the volatility of the equities asset class and its impact on earnings was cushioned by EPF’s other more stable asset groups, such as fixed income.

“Despite its volatile nature, this asset class has higher long-term expected returns. Equities will continue to play a pivotal role in enhancing returns and ensuring we are able to declare dividends of at least 2% above inflation,” he said.

A total of 50% of EPF’s investment assets are in fixed income instruments, which continue to provide consistent and stable income.

The first quarter saw fixed in­come investments returning RM4.85bil, equivalent to 50% of the quarterly investment income, while income from Malaysian Govern­ment Securities and Equivalent in 1Q2019 was recorded at RM2.52bil.

A total of RM0.9bil out of the RM9.66bil gross investment income was generated for syariah savings and RM8.76bil for conventional savings.

On the outlook for the year, Mo­­hamad Nasir said the global market was expected to remain volatile in view of sentiments that were largely dominated by the ongoing US-China trade war.

He added that Bank Negara Ma­­lay­sia’s move to reduce the overnight policy rate was expected to have a positive impact on the eco­nomy and help offset any economic downside. — Bernama