Not up to us to check source of plastic waste, says Perak DoE

IPOH: It is not within the Perak Environment Department’s jurisdiction to ascertain where companies source for plastic waste which is then sent to a recycling firm here, says state director Norazizi Adinan.

Its duty was to ensure that the deal was done legally and that no toxic or hazardous materials were transported here, he added.

The recycling company in question, Resourceco Asia (M) Sdn Bhd, operates according to the law, and every month the department receives an inventory of the 50 firms that supply plastic waste to the recycling company to be turned into processed engineered fuel.

“We not only get the names of

the companies supplying the waste, but also a list of the weight and mass from Resourceco,” Norazizi told reporters during a site visit to the waste storage centre at IGB Industrial Area in Tasek here yesterday.Also present were state Environ­ment Committee chairman Dr Abdul Aziz Bari and Resourceco managing director Pavel Cech.

A British news website recently claimed that plastic waste was being dumped in Malaysia from abroad.The Daily Mail Online quoted a BBC trailer from a documentary that showed celebrity chef Hugh Fearn­ley-Whittingstall finding mountains of plastic waste from Britain that were intended for recycling, but were instead dumped in Malaysia.The chef had apparently found plastic packaging of well-known British brands among the trash.

Abdul Aziz said the site was a temporary storage area for the materials and that the reports by foreign media was not accurate.

He said media representatives failed to get an explanation from the company and reported a one-sided news piece, likely to pressure their government on plastic export.“So, what we see at the site is legal and the company is in the midst of constructing a new storage area, which is expected to be completed by year end,” Abdul Aziz added.Cech said the materials were being stored at the site temporarily while a new warehouse was built at the fuel production plant 800m away.He said all the raw plastic and rubber waste materials were used for the production of the alternative fuel to be sold to cement factories.

“While our warehouse is still under construction, we still do run production to ensure a zero-waste solution to local industries.

“Thus, we need to store the materials somewhere and with the knowledge of the department (Environment), this site is being used temporarily,” he said.

On whether the materials received were imported, Cech said the company only sourced for plastic waste from locally registered companies and that it also worked with other local plastic recycling sectors.

“These other companies have been recycling plastics and sometimes due to their colour, composition and so on, the materials are sometimes non-recyclable and thus sent to us to be converted into fuel.

“But we cannot bear any responsibility for the source used by local recycling companies, as it is not up to our company to judge their selection of raw materials,” he added. 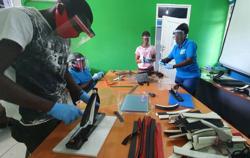 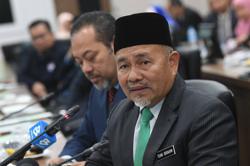