However, another minister is backing him by saying it is in line with the Cabinet’s decision to maintain the intake of students at 90:10 for bumiputra and non-bumiputra students respectively.

Minister in the Prime Minister’s Department Datuk Seri Dr Mujahid Yusof said the Cabinet also agreed that by maintaining this quota, priority would be given to students from low income (B40) families which includes non-bumiputra students.

“Dr Maszlee is merely defending the Cabinet’s decision, which corresponds to the original vision of having the matriculation programme to encourage bumiputra students to pursue their studies in science.

“I hope all parties will stop issuing statements regarding the matriculation quota system in order to respect the decision of the Cabinet,” he said in a statement yesterday.

Under the 2019 matriculation programme, the Education Ministry said 60% of seats had been allocated to students from the B40 group.

It was reported that Universiti Sains Malaysia vice-chancellor Prof Datuk Dr Asma Ismail defended Maszlee, saying the Education Minister should be praised as “education and job opportunities are connected to each other”.

Maszlee came under growing scrutiny for linking the matriculation quota system with unequal job opportunities for bumiputras in the private sector.

The backlash on the quota system started after April 19, when the Education Ministry said the 90% bumiputra and 10% non-bumiputra intake policy for matriculation, which is done based on meritocracy, would be maintained this year.

Maszlee also said the Cabinet allowed the number of students entering the matriculation programme to be increased to 40,000 from the previous 25,000, though the 90% quota for bumiputras would remain.

This met with further frustration from the public, with many requesting the ministry to abolish the matriculation quota system.

MCA vice-president Datuk Seri Ti Lian Ker said Maszlee should not have picked the example of requiring Mandarin proficiency when applying for a job as this was what certain jobs require and was unrelated to the ethnicity of the applicant.

“We urge the Education Minister to provide a straight answer, as all education policies have a monumental impact on a nation’s effort in the cultivation and development of human resources,” Ng said in a statement last Tuesday.

The ministry clarified and gave assurance that the additional intake of 15,000 for the matriculation programme would not affect the selection process for entry into local universities. 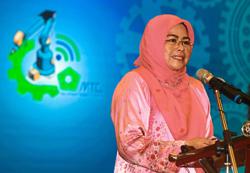