Tales of love at mass wedding

An unforgettable love story: Some of the couples celebrating after registering their marriage on the auspicious day of ‘Wo Ai Ni’ (I Love You) at the Ipoh Chinese Chin Woo Athletic Hall.

IPOH: Former insurance agent Chai Pei Fun was told by her superior to see a client two years ago. The 28-year-old ended up meeting her soulmate.

Chai said it was love at first sight when she met Choo Gia En, 31.

“I was told to meet a potential client that day but I was reluctant to because I had been tired after going for a swim.

“However, I changed my mind at the very last minute,” she told reporters during a mass wedding at the Ipoh Chinese Chin Woo Athletic Association hall here yesterday.

Recalling that fateful meeting, Chai said: “The moment our eyes met, I felt a spark.

Choo said they both lived in the same neighbourhood for eight years but had never met each other.

“I think it was fate that brought us together,” he said, adding that both of them are farmers now.

They were among 27 pairs who exchanged their vows on May 20 – a date when uttered in Mandarin sounds like wo ai ni (I love you).

As for Fong See Keong, 67, it was double celebration as he was getting married on his birthday.

Fong added that he had known Pooi Eng Boi, 47, for 13 years and they had been together for eight years.

“She was my hairstylist for many years.

“We finally decided to settle down.

“I have not met anyone who loves me as much as she does,” he declared.

Pooi said it was Fong’s kind and loving nature, including towards her family, that attracted her to him.

“I had never seen someone as beautiful as her and took the first step of requesting to add her as a friend.

“We started dating seriously after two months,” he remembered.

Woon said there were ups and downs in their relationship.

“We took a break for a year when she studied in Kedah as we couldn’t handle a long-distance romance.

“But I am glad we got back together,” Woon said, adding that his wife was a very loving person by nature.

Woon said he proposed to Lee during a karaoke session on Christmas eve by surprising her with a video of their time together before popping the question. 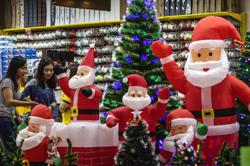