MELAKA: The cause of discolouration and dead fish in Sungai Melaka is not due to pollution, says State Housing, Local Government and Environment committee chairman Datuk Tey Kok Kiew.

Tey said the river had instead turned brackish and added that this led to a high level of salinity caused by ocean currents.

“Only the Tilapia species was affected in the Monday (May 21) incident and seven samples collected from various points along the Melaka River tested by the Environment Department (DoE) indicates the cause wasn’t due to effluent discharges or release of industrial waste,” he said in a press conference Tuesday (May 21).

Tey said DoE also discovered that the fish were mostly dead at the river’s estuary and not along the channel.

“Logically, if there was a pollution, it would have first affected the spot where the effluent was discharged,” he said, adding that the tourism activities along the river will continue as normal.

“We discovered 28 of these sites had complied with the prerequisites on effluent management except for one.

“That one factory had committed the offence in January and was issued a compound notice by DoE,” he said.

Tey said the discolouration of the river was caused by the flushing work by the Drainage and Irrigation Department at the Batu Hampar barrage gate.

He said the dry weather had caused the water to stagnate and flushing work caused the sediment from the riverbed to turn certain stretches of the river black .

“The same situation had occurred in April 2017 where fish also perished,” he said.

Tey said the cleaning process of the river was still be done by the relevant authorities.

“Conserving and maintaining Sungai Melaka is of utmost importance for us as the river holds a historic value as well as being the backbone of our tourism and agricultural industries,” he added.

DOE to probe 16 hotspots across country 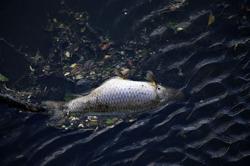