TAMPIN: A protest by villagers near Gemencheh has led to the closure of an illegal factory involved in the burning of used tyres.Enforcement teams from the Department of Environment and the district Land Office swung into action on Wednesday after protests by villagers in Air Kuning Selatan went viral on social media the day earlier, said state Health, Environment, Cooperatives and Consu­me­rism committee chairman S. Veerapan.

“The teams went to the factory at around 11am but the owner refused to open the main gate although he was asked to do so earlier.

“We reported this to the police before cutting the lock to the main gate to gain entry,” he said.

Veerapan said the enforcement team found heaps of used tyres and 12 brick kilns, which were still hot when the teams moved in.

He said a preliminary probe by the authorities found that the owners had breached several laws, such as not having an Environment Impact Assessment report done before commencing operations.

“There were no measures put in place to protect the environment.

“We also found traces of carbon from uncontrolled burning dumped on the ground as well as sludge,” he said, adding that the factory was operating on government land.

The teams, he said, took several samples from the area for tests.

Veerapan said the management also failed to apply for a business licence or seek approval from the local authority to operate.

Since the owner refused to take calls from the team, he was sent an SMS that the operations at the premises must be stopped.

The owner, Veerapan said, would also have to clean up the area and properly dispose of all wastes at facilities licensed by the DoE.

“The factory was apparently disposing of the scrap tyres using pyrolysis, which requires a proper recycling plant.

“The brick kilns were not equipped with any system to prevent air pollution,” he said.

Veerapan said the enforcement teams also issued a stop-work order to the management of another plant being built to treat e-waste or sche­duled waste from the electric and electronic industry in the same area.“They got no approval from the authorities to set up the factory.

“The owners would not be allowed to proceed until they submit an EIA report,” he added. 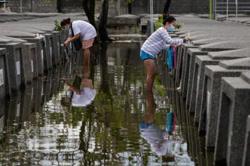 Filipinos flock to cemeteries ahead of All Saints Day closure