‘Good effort, but there’s more to do’

PETALING JAYA: The government needs to buck up and deliver. That’s the key message from a survey, commissioned by The Star, of 1,079 Malaysians of their assessment of Pakatan Harapan’s performance, one year after the coalition’s takeover of Putrajaya.

The findings also showed that respondents were willing to give the government until the next general election to deliver on its pledges.

The poll by international survey agency YouGov Omnibus found that 47.6% – nearly half of the total number of respondents – were not satisfied with the government’s performance over the past 12 months.

Those who said they were satisfied made up 35.8% of the survey respondents, while 16.6% said they did not know.

On whether they felt the Federal Gov­ernment was on track and making good prog­ress in delivering on its promises, the biggest response was also negative.

The remaining 18.9% of respondents said they did not know. 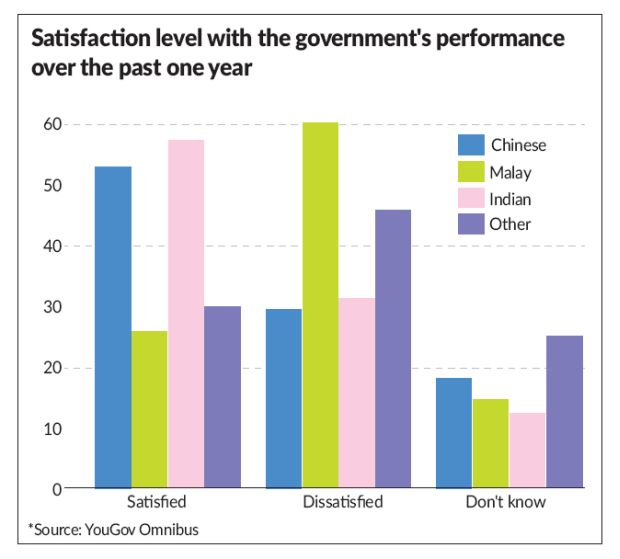 Asked how much more time the government should be given to deliver on all its promises, the most popular response (26%) was that Pakatan needed until the next general election (see graphics).

Pakatan’s five-year term following its win in the May 9 general election last year – which is calculated starting from the date Members of Parliament are sworn in – ends on July 16, 2023.

The racial breakdown of the survey respondents roughly reflects the ethnic ratio in the country.

According to data from the Department of Statistics, the country’s population is 69.1% Bumiputra, 23% Chinese and 6.9% Indian with the remaining 1% classified as “Others”.

Divided by ethnicity, the survey results showed that Indian respondents were the most satisfied with the government’s performance.

Among the Indian respondents, 56.9% of them said they were satisfied, while 52.7% of the Chinese respondents expressed a similar sentiment.

The satisfaction level on the government’s performance was lowest among Malays at 25.6%.

Among Malay respondents, 59.9% of them said they were dissatisfied, while 14.5% said they did not know.

Tun Dr Mahathir Mohamad on Monday addressed the decline in support for the Pakatan government.

In a group interview with the media, the Prime Minister explained that the government could not afford to buy the people’s support by giving lavish allowances similar to what the previous administration did.

This, added with the current government’s determination to stamp out corruption, had turned some people against Pakatan.

“We find that support for us has declined among certain groups who have been getting extra salaries.

“This is part of the reason why support for Pakatan parties has fallen,” said Dr Mahathir. 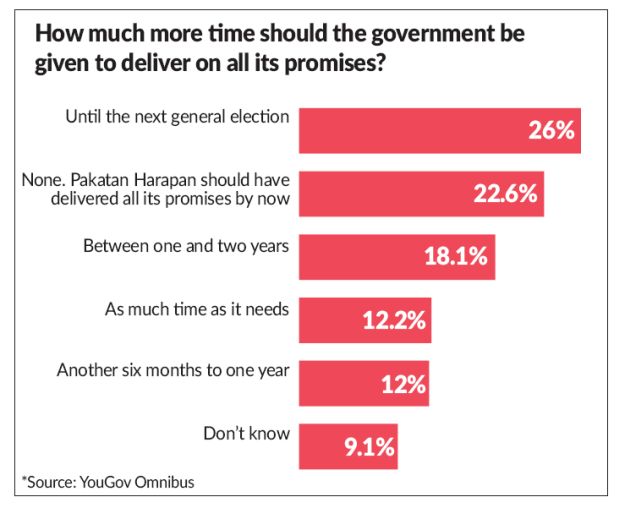 The survey respondents were also asked to choose five of the most urgent issues they felt the government must focus on from a list containing 11 options.

The most popular choice – with 19.2% of respondents including it

in their top five choices – was that the government must safeguard the interest and privileges of Malays and Bumiputras, uphold the institution of the Malay Rulers and defend the interest of Islam.

Promoting racial and religious harmony was also high on the agenda, landing as the fourth most popular choice among respondents.

The other big issue among those surveyed was bread and butter worries, as well as concerns about the economy.

These include the need to reduce the prices of essential goods, boost the economy and create more job opportunities.

The survey also asked whether the Prime Minister should reshuffle his Cabinet.

Among the respondents, 64.6% suggested that Dr Mahathir replace some of his ministers, while 16.1% said he should keep the same team for the next year.

YouGov is an online market research and data analytics firm founded in 2000. Its research methodology is based on weighing responses collected through online polls in accordance with demographic information.

Its headquarters is in the United Kingdom, with operations in Europe, North America, the Middle East and Asia-Pacific.