Fire at Sabah-Sarawak gas pipeline, no explosion or casualties reported

MIRI: A fire occurred at the Sabah-Sarawak interstate gas pipeline near the remote Long Segemang village in Lawas district in northernmost Sarawak early Wednesday (May 8).

Sarawak Fire and Rescue Department in its latest updates said the incident happened at 1.37am.

"Bomba in Lawas town was alerted to the fire at 1.37am and deployed firefighters to the site.

"The fire was spotted at a section of the pipeline where there was a leak.

"Petronas has shut off that section of the pipeline.

"Bomba Lawas team left at 3am after the fire was contained," said Bomba Sarawak.

The fire did not result in any explosion or injuries to anyone.

Petronas technicians are at the site now.

Long Segemang is one of the many villages where the gas pipeline snakes through from its starting point in Kimanis in Sabah to Bintulu in northern Sarawak.

This latest incident is the third one to happen along the 600km-long pipeline since it was built 10 years ago.

On Jan 10 last year there was an eruption along the section of the giant pipeline near the Long Luping settlement located adjacent the Sarawak-Sabah border.

The pipeline is to channel gas from Kimanis in interior Sabah to Bintulu port in northern Sarawak for processing and export.

The pipeline is a RM4bil project by Petronas that started about 10 years ago.

The entire length of the pipeline snaking through the rural frontiers is 600km long.

On June 11, 2014, an explosion occurred in the hills of Lawas district when a leak happened at a section of the pipeline.

No one was injured in that mishap. 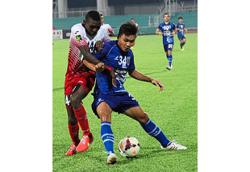